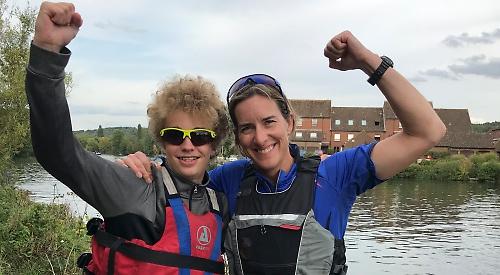 A TEENAGE boy from Henley completed a 123-mile kayaking challenge along the River Thames.

Elliot Fielder, 15, set off from Lechlade in Gloucestershire on Monday last week and paddled about 20 miles each day until he arrived at Teddington Lock in London early on Saturday evening.

Elliot, who lives in St Andrew’s Road with his parents Justin and Jo and siblings Tom, 14, and Robyn, eight, was raising money for a volunteering trip to India next year.

The Gillotts School student spent about seven hours a day in his kayak, which was provided by Henley Canoe Hire.

He decided to take on the challenge despite his only experience being two canoeing holidays on the River Wye in Wales.

Elliot was joined in the boat on each day of the challenge by family and friends including his parents, uncle Stephen Davies and godparents Steve Dance, former Upper Thames rowing club rower Ian Neville and Olympic rowing champion Dame Katherine Grainger. He said: “It was good having a fresh pair of arms every day and nice to have someone to talk to.

“They were all impressed with how I was doing but for most of the time we talked about other things. At the end they all said how impressed they were.”

Elliot was cheered on from the bank by supporters including his sister and best friend Leo Allen, who joined him in the kayak on the final day. Family members held up homemade signs telling him how many miles of the challenge he had completed which helped when he was struggling with tiredness.

He said: “The first day was all right and I wasn’t tired at all but the second day was tiring and days three and four felt like they were dragging on.

“It got easier towards the end because I knew I was getting closer. The support on the banks also really helped.

“When I got to Teddington I was just relieved, to be honest. I was too knackered to think much at the time but now I’m proud that I did it.”

Elliot raised about £1,000, which will go towards his visit to northern India and Uttarakhand in the Himalayas after he completes his GCSEs in July next year.

He will be going with World Challenge, which runs educational expeditions for schools where students provide support to local communities. The students are expected to raise the full cost of their expedition, which is about £3,000.

Elliot said: “I’ve never been to a place like India. I asked a lot of people who have been what it’s like and they said it would be a totally different experience.”

Mrs Fielder, who paddled with Elliot on one day and spent the rest of the challenge following from the bank, said: “I’m incredibly impressed with his determination and resilience — he didn’t complain at all.

“He just got his head down and got on with it, which is very impressive for someone who is only 15.

“I was broken on Tuesday night and couldn’t have got back in to the boat on Wednesday. All his godparents are rowers but they were the same.

“The fund-raising is going really well. I asked all the adults to pay for the privilege of going in the boat with him and also had it on Facebook, so we’ve had quite a lot of donations.”

Meanwhile, Elliot doesn’t plan to get back in a kayak any time soon. He said: “It has not put me off but I probably wouldn’t do it along the Thames again.”