Museum must be more interesting and relevant 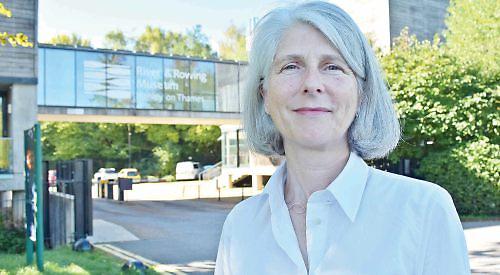 THE new director of the River & Rowing Museum in Henley is aiming to attract more visitors from the local community.

Sarah Posey, who began work in June, says most residents do not appreciate the full range of exhibitions, events and workshops available at the Mill Meadows venue or their relevance to their lives.

The anthropologist and former British Museum curator and her staff are now writing a plan outlining the museum’s goals for the next five years.

The museum, which is a charity, opened in 1998 and is dedicated to the River Thames, the sport of rowing and the town of Henley. It attracts more than 114,000 visitors annually.

The plan could include expanding its programme of educational events and giving local clubs and groups a chance to stage exhibitions in its community gallery.

The museum could also include more displays on women and disabled people in rowing and the ecological importance of the river.

Dr Posey has appointed a market research agency to survey visitors and members to find out what improvements they would like to see. The researchers will also ask Henley residents who have not been to the museum what would spark their interest.

Dr Posey, 55, said: “As we celebrate our 20th anniversary year, we’ve really embraced the opportunity to reflect on our future and start thinking about what we’d like to achieve over another two decades.

“We should have some firmer marketing goals by November but one theme already emerging from both our internal research and just generally talking to people is the need to get the community involved.

“We have a lot of local supporters who want us to succeed but for most people in Henley we’re just not on their radar — or, if we are, they’re not sure if what we do is of any interest or relevance. There’s a perception that our subject area is pretty niche.

“When I was telling friends that I’d got a job at the River & Rowing Museum, their eyes lit up as I explained the ‘river’ side of things but started to glaze over when I moved on to the ‘rowing’.

“People don’t understand how diverse our work is or how broad its appeal is. We need to communicate that better and listen to our audience more. The environmental education side of things could grow more. It’s already an important strand in our work with schools but we could be doing more with other groups and the general public.

“It’s a wonderful opportunity because, as a society, we’re becoming more concerned about looking after the natural world and I was very pleased that the first exhibition I spoke at was Henley in Transition’s display on plastic re-use and recycling.

“We’re becoming more aware of the need to use our resources sustainably and do as little harm to the natural world as possible.

“We often also forget what a powerful influence nature has on us but a walk by the river can tremendously improve people’s wellbeing.”

Dr Posey, who is living in Greys Road, says she also wants to “reinvigorate” the museum’s membership scheme by offering incentives such as private viewings. This would help guarantee the venue has a stable footing.

She explains: “Many people don’t realise that we’re an educational charity that receives no public funding for our core budget. We get some Arts Council money on a project-by-project basis but to function we need to generate a considerable income through admissions, catering, retail, event hire and so on.

“We want people to continue supporting us while enjoying a much closer relationship through invitational events.”

Another priority is likely to be increasing the number of volunteers so the museum’s reputation is spread by word of mouth.

This process has already begun thanks to the success of an exhibition on sculptor Barbara Hepworth earlier this year which helped take the number of volunteers from only a “handful” to about 70.

Dr Posey hopes that a spring exhibition on artist, writer and political thinker William Morris and his relationship with the River Thames will have a similar effect.

She said: “Volunteering helps the community to feel as though it is ‘their’ museum. It also offers a welcoming environment where people can build their skills, which may be vital if they’ve been out of work for a while and want to build their confidence back up.”

Dr Posey was born and brought up in Hampstead and studied anthropology at the University of Cambridge. She developed a keen interest in the subject in childhood as her mother June, a potter, studied it in later life and the pair would regularly visit the Museum of Mankind in Mayfair, where she later worked.

She recalled: “I saw how museums can provide a powerful opportunity to stand outside of your own world and engage with people and cultures of other times and places.

“The Museum of Mankind had a very distinctive approach for its day because it didn’t just show objects in glass cases. It would try to convey some of the wider context and environment that its artefacts originated from through using sound, smell and set design.

“Museums are getting much better at doing this now to the point where some are using virtual reality and other technological innovations. However, you can achieve great things with photographs, moving pictures and even oral histories as people talking directly about their lives can be more meaningful than listening to a curator’s interpretation.”

After graduating in 1985, Dr Posey travelled around China and Japan teaching English for two years and then got a temporary role in the bookshop at the British Museum.

After six months she was appointed curator at the Museum of Mankind, where she was responsible for maintaining its collection and arranging and supervising private visits by researchers.

In the early Nineties, the museum enrolled her on a PhD programme in anthropology and she spent about a decade writing her thesis while still working.

She met her husband Nigel Worlidge, who works in the building industry, through a mutual friend and the couple married in Devon in 1997 before having their son Sam, now 19.

In 2000 the Museum of Mankind shut in order to integrate the exhibits with the British Museum’s main site in Bloomsbury and when Sam arrived the couple were keen to leave the capital.

In 2005 they moved to Lewes when Dr Posey was appointed keeper of world art for the Royal Pavilion and Museums of Brighton and Hove.

She was then promoted to head of collections, interpretation and learning and was still in the role when she learned of the vacancy in Henley.

Dr Posey said: “I had reached the stage where I was ready for a new professional and personal challenge. I had heard of the River & Rowing Museum because of the awards it had won for both its education and its extraordinary building so it felt like the perfect opportunity, especially as our son had gone off to university and relocation was much more feasible.

“I attended two interviews and was absolutely thrilled to be accepted as I know the competition was incredibly tough. With 30 years’ industry and networking experience, I knew there was a lot I could bring to the table.

“First and foremost, I’m a museum professional with a lot of transferrable skills and that is what they needed.”

She knew something about rowing as her father-in-law John Worlidge rowed for Cambridge in the 1951 Boat Race and was part of a GB rowing squad that competed at the Olympics in Helsinki in 1952.

Mr Worlidge, who is now 90 and lives in Surrey, is a member of Leander Club in Henley and attended its bicentenary exhibition at the museum earlier this year.

Dr Posey said: “We can draw in other people with specialist knowledge around the river and rowing but, of course, I’m very interested in building my own knowledge of those subjects.

“The theme of the river is a universal one and, as an anthropologist, I recognise that rivers have always been powerful features for building communities, societies and traditions.

“My first email of welcome was from David Barber, the Queen’s swan marker, and I didn’t know that such a role even existed!

“I also want to make rowing as a subject more accessible and focus more on topics like women’s rowing and disabled rowing, which we don’t make best use of at the moment. We could also look more to the future at how science is helping the sport, which I think is interesting.

“People have this idea that rowing is somehow ‘elitist’ but actually the royal regatta is the second largest free public event in the country after the Notting Hill carnival, while Leander Club has a good outreach programme.”

She missed this year’s regatta due to family holiday booked last year but she has already met representatives of Leander and Miriam Luke, who chairs Henley Women’s Regatta, and was given a tour by boat of the regatta course by Patricia Jordan Evans, director of the Bohun Gallery in Reading Road.

Dr Posey said: “I’ve been bowled over by how beautiful Henley is, from the views on the riverside to the town centre and surrounding countryside.

“I’ve also had a really warm welcome from the team here and I’ve been really interested to hear all their thoughts. We’ve got a lot of strengths to build on here, particularly with our educational work.

“As a small, independent institution, we’ve done very well to be able to reach 20,000 people a year while the quality of that teaching is also stunning. The building of the core collections and the creation of a gallery dedicated to John Piper, the first in the country, was striking and I know that has brought in new visitors but I think one of our prime exhibits is the building itself.

“It looked amazing from the very first time I saw it. I believe it has aged gracefully and blends beautifully into its surroundings. It’s also significant as it is Sir David Chipperfield’s first commission and he has since become world famous so we could definitely do more to highlight that. We should be telling the story of the building and explaining how special it is.

“I’m very excited about what the future holds as there’s a huge amount of energy and creativity among our staff, trustees and volunteers.

“We need to just reach out more so people understand what we do, recognise its importance and then come and enjoy a good day out.”