Minister says write to me about shortage of money 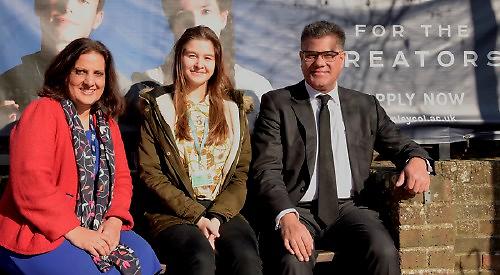 EMPLOYMENT minister Alok Sharma has urged staff and students at The Henley College to write to him explaining their concerns about the shortfall in government funding for further education.

The Reading West MP made the invitation when he visited the college on Friday to meet staff and students and discuss ways in which he could support the college’s calls for more money.

The college is one of many supporting the Raise The Rate campaign, which was launched jointly by 14 educational bodies, including the National Education Union and the Sixth Form Colleges Association, in October. It says funding for students of all ages should increase to £4,760 per year as many institutions are struggling to fund even frontline services like teaching and student support.

College principal Satwant Deol told Mr Sharma that, under the current formula, the college would receive seven per cent more funding per student if it were based in Berkshire or Buckinghamshire but the money should “follow the learner” instead because about two-thirds of its students came from those counties.

Teacher George Bull suggested that colleges should be able to claim back their VAT, which many independent schools could do because they were registered charities while the college was not.

Mr Sharma said: “You are very welcome to formally write to me to suggest that and I’m happy to put that forward to the Chancellor and make the case. Seriously, I would like you to write to me.

“I think all education is important. It’s very exciting to meet students from my own constituency today and to see the facilities that you have on offer.

“From an overall funding perspective, the Government is putting more money in and there are certain areas that we are focusing on but it has been interesting to hear of the situation at The Henley College and I will see how it may be possible to follow up.”

Zuzanna Kulczewska, who studies A-level English, photography and psychology, said she had moved from another college because she wanted to develop her workplace skills and not just study. She is now doing photography work around her course.

Mr Sharma said: “Sometimes there’s a disconnect where the skills we’re giving young people aren’t necessarily tuned in with what the world of work requires.

“We need to think about how are we going to help and equip them so that they can get a job easily.”