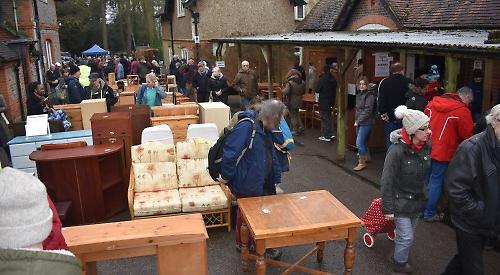 VOLUNTEERS who sort donations and supervise the second-hand goods sales at Sue Ryder’s Nettlebed hospice say these should not be scrapped.

The charity, which is to close Joyce Grove at the end of March, says it sought an alternative venue for the sales but none was available so it has no choice but to axe them.

But helpers say the sales give older people a vital opportunity to socialise as well as raising more than £500,000 a year and there must be a landowner who can help.

The sales, which take place every three weeks, were founded more than 30 years ago by a small group of women who used to arrange flowers for patients at the hospice.

They came up with the idea after an elderly supporter bequeathed all their possessions to Sue Ryder and the charity had to find a way to sell them all.

Now more than 200 volunteers, many of whom lost loved ones at the hospice, work up to several days a week cataloguing donations of clothing, jewellery, furniture, electrical goods, kitchenware, toys, games, music, films and more.

Several have been in post for more than 25 years.

One volunteer, whose mother was part of the founding group, said she was “knocked for six” by news of the hospice closure and compared it to a bereavement.

Buyers come from as far as London for the sales, which are so popular that Nettlebed Parish Council has to liaise with Sue Ryder to minimise disruption caused by people parking in the village.

Peter Phillips, who has been a volunteer since his son Ian died at the hospice in 2013, aged 42, and supervises the furniture section, said: “The vast majority of the volunteers are sad about both the hospice closure itself and the fact that the sales aren’t continuing.

“We receive and sell so many kinds of goods and it’s very lucrative for Sue Ryder so it’s a surprise they haven’t copied Oxfam, which recently set up a big second-hand sales hub at Cowley.

“We’re feeling very disappointed because many of us lost friends or family members at the hospice yet none of us was asked if we knew anyone who could offer a new venue for sales.

“There’s a very broad cross-
section of people here from at least a 15-mile radius so while it’s not guaranteed that someone could have helped, they could at least have explored it.”

Mr Phillips, 72, of Wallingford Road, Goring, said he was disappointed that the charity will not provide new beds elsewhere when the hospice closes and instead will focus on its hospice at home service. When it announced in 2018 that it was closing Joyce Grove, Sue Ryder promised a new facility with at least eight beds as opposed to the original 12.

However, it now says demand has dropped and most people would rather die at home.

Mr Phillips is among those supporters who dispute the charity’s statement.

He said: “Our son was relatively young with small children and didn’t want to die at home with them around.

“The hospice was wonderful, as everyone will tell you, and a much better option for people who live alone or whose families live miles away and can’t be there regularly.

“Everyone understands that the building isn’t fit for purpose and is too expensive to run, so while it’s sad we don’t oppose closure in that location.

“However, we expected inpatient beds and fundraising sales to carry on somewhere else and it’s a shock that this isn’t happening.”

Graham Spearpoint, 71, from Lower Shiplake, who became a volunteer four years ago after a friend died at the hospice, said: “It’s disappointing that management don’t seem to want that £500,000 because other charities would surely want that money coming in. That’s hardly treating your own fundraising with a great deal of interest.

“We also just don’t believe that nobody wants to die in a hospice any more. We know from our personal connections that many people or their families just don’t have the capacity to care for someone in their final days.”

Chris Spencer, 65, of King’s Road, Henley, who joined the sales team four years ago, said: “The sales are a huge community event and raise a significant amount each time, even on quieter weeks.

“They stop goods from going to landfill and offer, for example, affordable furniture to people setting up home on a budget. A young mum could kit out a child’s bedroom for much less than buying new.

“This is a big part of our lives and we get a lot out of it. It’s a shame they can’t continue — there must be someone in this area with a large barn we could use. It would be nice if someone came forward after reading the Henley Standard.”

The final three sales will take place on February 15, March 7 and March 28.

Sue Ryder says it struggles to raise the £3.1 million needed to provide care across South Oxfordshire, of which only a quarter comes from statutory sources, and it has become increasingly difficult to run a hospice in a Grade II listed house not built for the purpose.

It is still seeking new offices for the outpatient hub and cannot confirm whether this would include space for the hospice’s day services, such as counselling, arts groups and complementary therapies.

It says this depends on finding a location which is large enough.

Several therapists who currently provide day services have privately expressed concern but told the Henley Standard that they have been instructed not to comment.