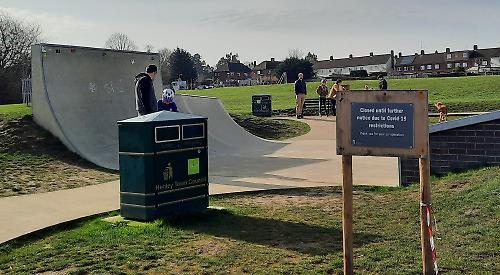 TEENAGERS have been using Henley skate park in breach of the coronavirus restrictions.

The facility at Makins recreation ground in Greys Road is out of bounds during lockdown and the town council has put up signs saying it should not be used.

But groups of children have been meeting up with their skateboards and BMX bicycles and sitting on benches.

This is not the first time that the closure order has been ignored. In May, during the first national lockdown, the council fenced off the skate park after reports of people using it.

However, this had little effect as users just moved the temporary barriers, even in view of council staff.

Kellie Hinton, who chairs the town council’s recreation and amenities committee, said the council was doing all it could to help residents follow the coronavirus restrictions.

“It is really hard,” she said. “As a town council and as landlords, we are trying to follow the government guidance. At the time of the first lockdown we paid for temporary fencing but the kids just took it down, even when the park services team were there. It is difficult when people won’t help themselves to keep safe.”

Cllr Hinton said the council sought advice from Skateboard GB, the governing body of skateboarding, and the Government on whether the skate park could stay open in light of public playgrounds being allowed to do so.

She said: “The advice said that the skate park should be shut but we didn’t want to have what happened last time with the fencing so we went with the signage option. It is a predicament because while the skate park is shut we are limited in what we can do to enforce that.”

Cllr Hinton said the council had had to remind parents to social distance and to stick to the number restrictions in its playgrounds as well.

She said: “We have signs outside all our playgrounds and each one is different as they are of a different size. One might allow nine people and another 15 and those numbers have been broken.

“But we only have a certain number of staff and the parks services team are not security staff.

“We have been trying to tell people that if the playgrounds and parks are busy there are other parks they can go to. We are fortunate to have so many parks close to each other.”

Cllr Hinton said the council would not put its staff in the way of confrontation as people found it difficult to cope with the restrictions.

She said: “The pandemic and the resulting lifestyle changes have not gone down well with people and it is a difficult one because you are not going to please everyone.

“I wouldn’t want to put our staff in a situation where there would be confrontation. People are really aggressive at the moment and we don’t want to put staff up for abuse.

“Hopefully, now that half-term has finished and people are back to being home-schooled we will see less use.”

Colin Brathwaite, of the Henley Skatepark Initiative, said: “This is a challenging time for everyone and we have a collective responsibility to do what we can to reduce transmission rates in order to bring this horrible virus under control.

“I would urge everyone to adhere to government guidelines with regards to skate park use.”

Last week, the council reminded people who use its playgrounds that these are for exercise and should not be used to socialise with others.

There are signs at each one, which state the maximum number of people allowed in at any one time.