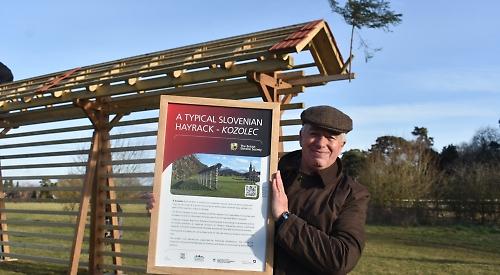 A TRADITIONAL Slovenian hayrack has been erected at Gillotts Corner Field in Henley.

This marks the town’s twinning relationship with the Slovenian town of Bled, which began more than eight years ago.

The timber hayrack is a cultural symbol in Slovenia, where it is known as a kozolec.

It was donated by the British-Slovene Society and made by craftsmen in Slovenia, supported by the Office for Slovenians Abroad and Trimo, a company specialising in construction materials.

Marcus Ferrar, a trustee of the society, was present as four workmen flew in specially from Slovenia and erected the hayrack on the recreational land off Greys Road, which is owned by the town council.

Damjan Bajc and his son Luka, Gregor Pungartnik and Fraci Urbic, from Trebnje in south-east Slovenia, were helped by members of the council’s parks team.

Mr Ferrar said: “The hayrack was brought over in a truck and that took about two days.

“The craftsmen spent two days putting it together. They started on Saturday, making the foundations of the hayrack, which was then left to set for a few hours.

“It is made from oak and spruce and the roof tiles are ceramic so it can withstand the weather.

“We attached some mistletoe to the hayrack for good luck. It should be ivy but this is the closest we could find. The spruce branch at the top tells everyone the work is finished.

“In July there will be a picnic and we usually have 45 to 60 people attend from all over the country and some guests from Slovenia. It is mostly families who have moved over here and the Slovenian ambassador will also be in attendance. We are hoping the mayor of Bled will visit some time in April.

“Bled is a beautiful part of Slovenia. There are mountains and a lake. In the middle of the lake is a church, which you can row or swim to.

“The food is lovely — they have hearty dishes, soups and sausages with soured cabbage and plenty of fresh vegetables. The people are very welcoming. My wife, Evelina, is from Ljubljana, which is the capital of Slovenia. She works as a translator for the family courts. She was very excited to come and see the hayrack.”

Mrs Ferrar, who is also a trustee of the Slovene-British Society, said: “The hayrack looks fantastic. This one stands at 3.5m tall and is about 8m long.

“This is smaller than the ones used in Slovenia for farming.

“It was designed by the Hayrack Museum in Slovenia, which recommended the best materials and craftsmen.

“We do not usually nail down the roof tiles but it is so windy here that we had to ensure they would stand the weather.

“There is a cockerel on the top, which is a symbol in Slovenia that commonly represents farmland. It is a really nice addition.

“The lucky ivy is made from a wreath which is blessed over Easter and then stored in the roof of a building to protect it from thunderbolts, fire and bad weather.

“The hayrack cost 10,000 euros to put together. We had lots of support for the transport, which was really helpful.”

Karl Bishop, manager of the town council’s parks team, said: “The team from Slovenia are great and the work they have done is really impressive.

“It will be nice to see what Henley could do for Bled in return in the future.”

The Slovenians planned to go sightseeing before flying home.