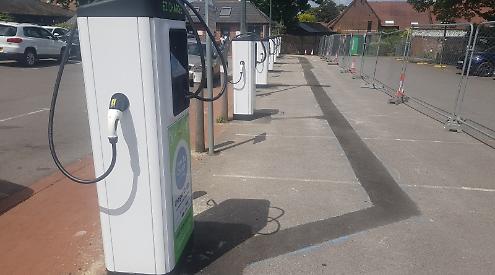 Each one is a twin unit which can charge two vehicles at once.

They are part of a roll-out of 62 charging points in council-owned car parks in Oxfordshire.

The £5.4 million programme is being delivered by a consortium of partners including Oxfordshire County Council, the University of Oxford, Urban Integrated UK and Bicester firm Zeta Lighting which is running the EV charging service under the trading name EZ Charge.

South Oxfordshire and other district councils are supporting the scheme and hosting the hubs.

The “fast” chargers allow residents without off-street parking to park free overnight and will work from 7kW to 22kW depending on the type of vehicle, the time of day and the take-up.

They will also offer battery top-ups to commuters and visitors during the day.

Councillor Stefan Gawrysiak, who represents Henley on the district and county council, said the installation of the chargers was a “fabulous achievement”.

He added: “To coin a cliché, it is the future and they will be more and more used and there will be more of these going in.” Mr Wood said the charging points were simple to use either using contactless or an app and EV drivers would soon be able to book a slot in advance via the app.

He said: “We have designed and developed this over the last few years to make sure they are at the top for reliability.

“We are unique in that we design, develop and now manufacture our own. We are talking to a lot of councils at the moment.”

Councillor Sue Cooper, cabinet minister for environment, climate change and nature recovery at the district council, said: “Electric cars are quiet and cheap to run but problems arise when you want to go away from home and you don’t know where the chargers are going to be, so to have some new charging points is a big advantage for everybody.”

There are two charging prices depending on the time of day — 35p per kWh during peak time and 30p per kWh between midnight and 7am. It would cost around £22 to top up an average electric car battery, which would take an average of four to five hours.

The 71-year-old, from Sonning Common, said: “We have got to go down this pathway and the sooner we start it the better.

“I have had a wall box installed at home and that has been quite an interesting experience.”

It is predicted that by 2030, one in five cars on Oxfordshire’s roads will be an EV, according to data modelling by the University of Oxford.

The programme, which is among the first of its kind in the UK, is being funded by the Office for Zero Emissions Vehicles through Innovate UK and the Government’s On-Street Residential Charging Scheme.