Recreation ground set to be open for June jubilee 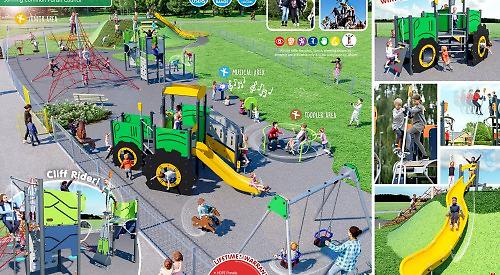 THE new recreation ground in Sonning Common will remain closed for another few months despite the groundworks being completed.

A multi-use games area has been installed at Memorial Park, off Reades Lane, and the new grass has grown well.

The work was carried by Blakedown Sport & Play, of Banbury, and was overseen by Aurora Construction Consultancy, of London.

However, the parish council has decided to keep the park closed until the rest of the work has been completed due to safety and maintenance issues.

The company, which was one of four companies that bid for the tender, has produced a computer-generated image of what the play area could look like with equipment such as swings, a cliff rider, a “memorial hill” fitted with a slide and a musical area.

The play area will have a rubber crumb surface to provide extra safety for the children before it is officially handed over to the council.

The facility should be able to accommodate up to 80 children, aged from one to 14, at once with 40 different “play features”.

The Tarmac Landfill Communities Fund has awarded the council a £100,000 grant towards the cost of the playground.

An additional £2,000 was donated by the Boshier Hinton Foundation, a grant-making trust which aims to improve the quality of life for people with disabilities or learning difficulties. Work on the play area is due to start this month and is expected to take months to complete, depending on the weather.

A pathway is also due to be created between the park and Farm Close, off Ashford Avenue. This is currently a tractor route for when the field was used for agriculture.

A route into the park already exists from Lambourne Road with access through the new homes of Sonning Grove, which were built by Linden Homes. The developer owned 10 acres of land which it sold to the council for a nominal fee of £1 in order to build the 50 properties next door.

The multi-use games area is due have lighting which will be allowed to stay on until 9.30pm.

The whole site is due to be landscaped. Cherry trees and hedging will be planted. Native trees and plants have also been chosen but the planting times will depend on the weather.

The council hopes to hold the village’s first fete on the field to celebrate the Queen’s platinum jubilee in June.

A preliminary programme has been drafted for the special bank holiday weekend from Thursday to Sunday, June 2 to 5 which includes a tea party, a falconry display and a brass band.

Councillor Diana Pearman, who chairs the Memorial Park working group, said: “The play space was decided through consultation with residents and advice from our play safety consultant, the working group and other councillors.”

Becky Jenkins, deputy parish clerk, said: “The tractor play unit is a nod to the agricultural past of the field and a roundabout was included because we do not have one in Sonning Common. I’m looking forward to seeing the designs become a reality.”