Festive musical has a jewel-like sparkle 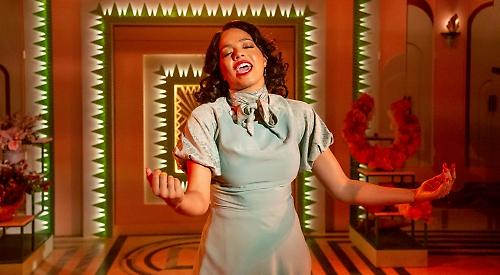 THE Mill at Sonning may not be a large venue but it certainly has grand ambitions.

Staging a classic Thirties Hollywood musical film has to be one of the grandest of all.

The original Top Hat, starring Fred Astaire and Ginger Rogers, featured Irving Berlin songs like Isn’t This a Lovely Day to be Caught in the Rain and Cheek to Cheek.

This stage version includes some other Berlin numbers, the most famous of which is probably Let’s Face the Music and Dance, to provide an energetic, heady evening of entertainment.

Into the relatively restricted space of the Mill stage, director Jonathan O’Boyle and choreographer Ashley Nottingham have packed an astonishingly tight yet fluid range of action, movement and emotion, all given shape and drive by off-stage music under the supervision of Chris Poon.

The story is simple enough. American dancer Jerry Travers, in London for a show, meets and instantly falls for Dale Tremont. She’s pretty partial to him too.

Accompanied by manager Horace Hardwick, Jerry pursues her to Venice where Horace’s wife Madge, who also happens to be an old friend of Dale, is holidaying.

Of course it gets complicated. The inevitable obstacles to true love include misunderstandings, crossed identities and a rival suitor in the shape of Dale’s Italian dress designer.

Does it all end happily? What do you think? Jack Butterworth is a poised and sunny Jerry, tap-dancing his way to the heart of Dale, attractively played by
Billie-Kay Payne.

Paul Kemble and Tiffany Graves make for an amusing counterweight as the married Horace and Madge.

Their acerbic commentary on marriage, Outside of That I Love You, is a perhaps welcome contrast to the rose-tinted duets of the principals.

Delme Thomas’s volatile Italian designer and Brendan Gill’s proverb-quoting butler add to the fun of an evening which, with its multiple costume changes and dynamic lighting, has zip, panache and energy to burn.

Yes, the Mill at Sonning may be a small space but this production of Top Hat really is a jewel in a gilded box.