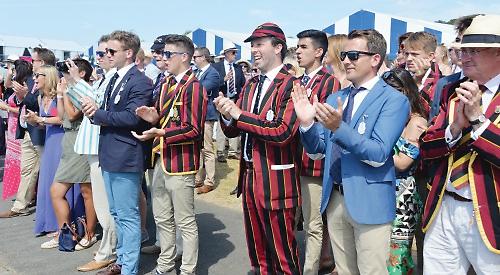 AMONG the dozens of fans cheering on Shiplake College at this year’s Henley Royal Regatta, there was one more noticeable than the rest.

He was a boarder at Shiplake from 2003 to 2008 and has attended every royal regatta since he left.

Now 28 and working as a marketing manager in London, Jack said: “I’m probably one of Shiplake’s biggest fans. I don’t know many others who go back every year for the full five days.”

This year, he was sporting a college blazer, bespoke trousers and cap plus a tie adorned with the school’s rowing emblem and even a watchstrap in Shiplake colours.

Jack said: “It’s a bit of fun. It’s obviously not the school uniform and I do get a few odd looks.

“I like to cheer the boys out of the boat area and back in and I think it gives them a boost seeing passionate old boys there. I saw other people around the regatta who gave me a shout of ‘Shiplake’ because I was so distinct. I like to think I’m a bit of an unofficial mascot.”

Jack rowed for Shiplake in the Fawley Challenge Cup at the 2007 regatta but his crew was knocked out on the first day.

He returned as a supporter the next year wearing one of the new college blazers and since then has added the cap and the trousers, which were specially made by Kristie Robinson at Henley tailors Collier & Robinson.

Jack said: “During the year I rowed the blazers were coming in and this is one of the prototypes, picked off the headmaster’s coat rack! It’s great having one of the first.

“About three years ago a friend made me the cap, which I’ve worn to the last three regattas. Two years ago I had the trousers made and I wore them to last year’s regatta and this year. They are bespoke and were fairly expensive.

“They are the only pair in the world and occasionally I’ll have parents or old boys asking where I got them. They either say they’re great or hideous!

“This year there were so many people taking sneaky pictures of me and I had plenty of attention.”

The college’s eight made it to Friday in the Princess Elizabeth Challenge Cup, where they lost by three quarters of a length to last year’s finalists Radley College.

Jack, who rowed with GB Olympic gold medallist Will Satch at Shiplake, said: “They did exceptionally well.

“Shiplake is a relatively young school compared to the likes of Eton and Radley. The training is fantastic and in a couple of years’ time they might have a real possibility of getting to finals day.

“I’m very optimistic for the future and, of course, I’ll be there every year to cheer them on.”