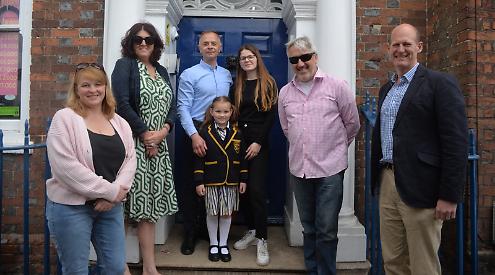 A GIRL who escaped the war in Ukraine started school in Henley this week.

Ariana Ihnatko, seven, has been given a place at Rupert House, an independent school in Bell Street.

She last attended primary school in Kyiv, where she lived with stepfather Oleg Belash and mother Liubava Ihnatko until nine weeks ago.

The family, including her grandmother Nataliia Pakholiuk, fled the country amid reports that the Russian forces were committing atrocities against civilians.

They were put in touch with Tim Brassey and his wife Dr Lisa Silver, of St Andrew’s Road, who sponsored them to come to the UK, and have been living with the couple since April 7.

Ariana’s last day in the classroom was the day before the Russian invasion so she was excited to return to lessons and be with other children again on Wednesday. Mr Belash, 53, said the family were “very fortunate” to be offered a place for her at Rupert House.

He said: “Getting Ariana into school was the main event, I would say, for our family. All that we are doing is around Ariana.

“We know the UK has one of the best education systems in the world and that’s why we are happy.

“It is through our sponsor family’s efforts that Rupert House has taken Ariana but Lisa and Tim told us that all the schools in the Henley area are very good.

“They proposed that we try Rupert House as they know the school because their kids went there. All the people we have met have said good things about it.

“It is important to have Ariana in school as, just like any other Ukrainian child, her education has been disrupted by the war.

“A lot of children have left Ukraine and are in neighbouring countries such as Poland, Hungary, Slovenia, Germany and Denmark and are doing lessons online.”

Mr Belash said he hoped going to Rupert House would give Ariana more confidence to speak English, which she has been learning since pre-school.

He said: “Ariana has been excited for the last two weeks and has been counting the days. She misses other children and it’s in her nature to be social and she makes new friends easily. It is important, of course, that she will get English lessons but she has picked up English very well. In Ukraine, at pre-school you are taught 50/50 in Ukrainian and English and she loved learning the two languages.

“Ariana knows a lot of words, it’s just the confidence to use them she needs to work on.

“She is very talented and is good at maths and has been able to read quicker than most other pupils and she likes to make up her own stories.”

Mrs Ihnatko said: “Ariana is a creative person and loves music and art. It is very important to me as her mother that Ariana is going to an English school because the system here is spoken of very highly regarding the opportunities it gives children.

“The uniform colours of Rupert House are yellow and blue, the colours of Ukraine, and so it must be fate.”

Ariana said: “I am very excited to be starting at a new school, to make new friends and seeing my new teacher. I have missed school. I want to go to classes but I also want to play with my friends.”

Since arriving here, the family have done lots of walking and spent time by the river.

On Easter Sunday they had a barbecue at the home of Mr Brassey and Dr Silver’s daughter in Watlington and Ariana was given chocolate eggs. Ukraine celebrated Orthodox Easter Day on Sunday, a public holiday, which was also Ms Pakholiuk’s 53rd birthday.

But Mr Belash said: “We have not been celebrating because this is not the proper time for a celebration.

“In Ukraine we would go to church and some people would stay there all night and there would be a large table with lots of meals and you would invite your family, friends and friends of friends.”

Ms Pakholiuk, a primary school teacher, has continued to give lessons online to her pupils five mornings a week.

She said: “There are sometimes difficulties with the internet as not all the children can be connected all the time but all my children want to be in school. Of course, it is better to be in school than online but there is no other way.”

Mr Belash worked in real estate in Ukraine and is looking for similar work here or in business or project management.

Mrs Ihnatko has secured a trial working at the Daisy Love coffee shop in Station Road.

Mr Belash said: “Now we have arranged things regarding Ariana’s school, we need to focus on our work. As a husband, father and a man, I need to provide for my family so I need to spend some time looking for a job.

“In the meantime, we have been following the news and while some expect the war to stop soon, Liubava doesn’t think there has been enough progress to stop it and, to her, Russia is getting worse and worse.”

Rupert House headteacher Nick Armitage said: “We can all see the efforts of the Henley community in supporting the people of Ukraine and we wanted to do our bit, too.

“When we found out Ariana’s age, I wrote to the year 2 parents to say what we would like to do and they all supported it.

“We wanted to make it possible because we have an ideal setting here as we have lots of children who have joined us from around the world and the learning support team is confident that we will be able to support Ariana.

“She has come from a very different educational experience and we will give her all the support she needs to access the curriculum here. The idea is not to throw her too much in at the deep end as it will be a big change for her and our first job will be to help her settle and feel part of the community here.

“We want to help her grow by the experience she has here, not just by learning a language and a culture, and we are keen to learn from her and will adapt accordingly.

“It is such a privilege for us to be able to support Ariana and her family and we are so pleased that Tim approached us and maybe we will support other families in the future as we have had some enquiries.”