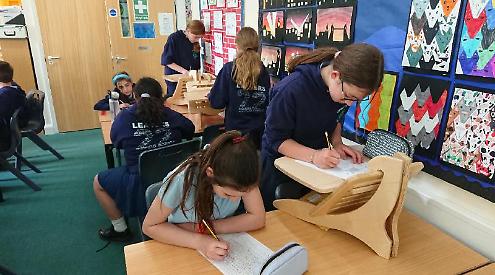 The portable desks, which can be placed on top of an existing desk, were trialled at the school and the response from both students and teachers was positive.

Deputy headteacher Rachel Salmons said: “The response has been brilliant, especially from pupils with attention deficit hyperactivity disorder and other neurodiverse conditions, who have really benefited from being given the option to move.

“The desks support them to feel more comfortable in the classroom and that has benefits for the teacher and the whole class.

“Many neurotypical children have asked to try them too and almost every single one has reported that they enjoyed the chance to stand up to work.

“We haven’t had a single incidence of children using the standing up as an excuse to be silly or distract others. We’ve even had some pupils asking to bring their parents in to show off the desks as they loved using them so much.”

The desks were designed and provided by a business in Lancashire called I Want A Standing Desk.

Founder Nick White said: “Introducing more movement into the school day is something that can benefit all pupils, including individuals with ADHD and other neurodiverse conditions.

“What we consistently hear from teachers is that concentration levels have improved, disruption has reduced and, importantly, the children very much enjoy using the standing desks. Not to mention the health benefits gained from increasing their physical activity levels.

“We are creating a generation of habitual sitters and I believe classroom standing desks can help with that. Studies in the UK and US have shown a tremendous benefit in schools where they are used.”

The desks are easy to assemble and the children are encouraged to do this themselves.

Mrs Salmons said: “What has been particularly great to see is the impact on the children’s independence. They are self-regulating when they use the desks, standing some of the time and sitting at others, and that’s a really important step.”

More than 600 primary schools across Britain are currently using the standing desks and view them as a key part of their active learning strategies.