Charlie’s back home after more treatment 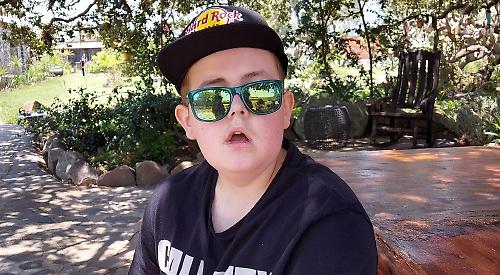 THE mother of a boy battling cancer for the third time says taking him to Mexico for cutting-edge treatment was the right decision.

Charlie Ilsley, 13, of Buckingham Drive, Emmer Green underwent three weeks of a new form of immunotherapy treatment, known as CAR-T cell treatment, in Mexico City in the hope of saving his life.

He flew home last weekend after an MRI scan revealed no new growth of the disease since his last scan on March 11.

Charlie, who was first diagnosed with a brain tumour in 2015 and now has a tumour on his spine, will return to Mexico on August 5 for a follow-up scan.

Charlie, who currently has no symptoms, was under the supervision of Dr Jason Williams, director of interventional oncology and immunotherapy at the Williams Cancer Institute, which also has branches in America and China.

Mrs Ilsley said: “The hospital was lovely and Dr Williams is really nice. The treatment had no side effects so it was the right thing to do 100 per cent.

“Dr Williams wasn’t expecting anything from the scan but he wanted a baseline as Charlie’s last scan was March 11 and it had been four months without treatment.

“He was really surprised because not only has it not grown, it’s not solid anymore, it’s breaking up and there was a lot of inflammation and a lot of fluid around it. That’s how the immune system is starting to go in and attack it.

“Dr Williams wanted a scan four weeks from the last one to make sure it’s working because this has never been done on anyone before.”

The family flew direct to Mexico but a couple of days after arriving experienced an earthquake measuring 7.4 on the Richter scale and had to evacuate their hotel.

Mrs Ilsley said: “The first couple of days were fine and then we had the earthquake and I wanted to come home, it scared the life out of me.

“It was a bit desperate because we’re coming out of coronavirus here and were going straight back into a major coronavirus area so everything was shut.

“We spent a lot time in the hotel room apart from walking down to Walmart which was two seconds away.”

The family visited Rancho Las Cascadas three times after being invited by the owners. It was about 90 minutes from their hotel and the family have been invited back when they return.

Mrs Ilsley said: “Six days out of the four weeks Charlie had a holiday. He was absolutely fine. He was horseriding, had a swimming pool, a hot tub, everything that Charlie loves was there.”

Upon returning home the family have had to isolate at home for two weeks because of the coronavirus pandemic.

Charlie’s initial treatment cost £25,000, which has been raised by the public and supporters.

The family now have to raise a further £4,000 for flights, the next scan and another stay when they return next month.

Charlie, who attends Highdown School in Emmer Green, was given the all-clear for the second time in August after radiation treatment in Turkey. But in November his family were told the he had cancer cells in his spinal fluid.