Increase in fly-tipping since new charge for recycling 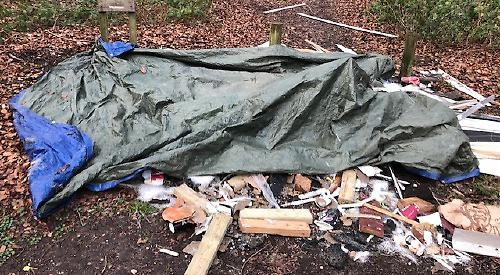 FLY-TIPPING in the Henley area has increased after new charges were introduced at recycling centres.

Official figures show the number of incidents of illegal dumping increased by 26 per cent when the fees for dropping off non-household waste were increased in October 2017.

The numbers were obtained by Trevor Crane, from Bix, who feared fly-tipping would increase when he learned of the new charges while visiting the household waste recycling centre at Oakley Wood, near Nuffield.

However, it scrapped this in order to save money and now charges at least £1.50 for every item and between £2.50 and £10 for larger items such as tyres, plasterboard sheeting and bags of plaster. The council said it had to balance its budget in the face of government funding cuts and might otherwise have to close centres.

Mr Crane, who requested the figures under the Freedom of Information Act, says the increase in fly-tipping locally is not a coincidence as a similar trend emerged in Oxfordshire’s three other districts and Oxford city.

He said: “The majority of district councils include the costs with that of refuse collection so the additional cost of fly-tipping is hidden.

“The county’s charges and the resultant additional cost incurred by district councils due to the increase in fly-tipping should be reviewed. A policy to encourage recycling should be implemented, not one that encourages fly-tipping and greater use of black bins, as fly-tipping is extremely difficult to police or prosecute.”

The county council says fly-tipping has increased by 40 per cent nationally since 2012 and it is working with district councils and the police to tackle it.

A spokeswoman said it was mostly done by workmen trying to avoid paying for commercial waste disposal, which isn’t allowed at household recycling centres anyway.

She said: “Fly-tipping is a serious environmental crime predominantly carried out by traders who do not wish to pay to dispose of their waste legally.

“We don’t believe that a small increase in the charge for householders to dispose of non-household waste will drive people to criminal activity.

“Oxfordshire County Council consulted residents on the changes in 2015 and 2016 and they indicated they prefer to pay to deposit waste rather than have their local site close.

“We acknowledge that there has been a small increase in some districts but chargeable non-household waste is not the sole cause.”

The council says it made £33,981 in revenue from recycling centres during the financial year to March 2018, when the new charges were introduced, compared with £18,551 the previous year.

South Oxfordshire District Council urges anyone witnessing fly-tipping to report it as the authority will examine the waste to try to identify the culprit and prosecute them.