Residents oppose site for homes due to flood risk 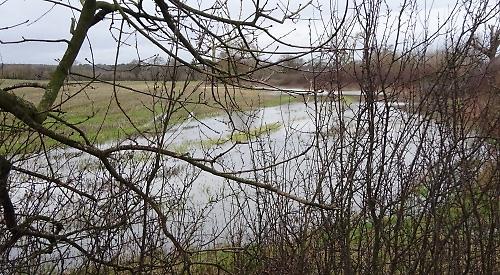 MORE than 60 people attended a public meeting to vent their frustration at plans to build 160 homes in Charvil.

It was organised by Charvil Parish Council on March 3 to give residents the opportunity to raise concerns with Wokingham Borough Council’s draft local plan.

It contains proposals for 75 homes on land west of Park Lane and 85 at land east of Park View Drive North.

Residents said the latter site was unsuitable due to the flood risk to future developments.

There are also concerns about the lack of infrastructure in the village, impact on traffic and loss of green space.

John James, who lives on Park View Drive North, said: “Charvil is only a small village and this would be a massive extension.

“I have been writing to Theresa May and she has said she will write to Wokingham Borough Council. I wrote to the council recently and said that I was very concerned with the risk of flooding on the site near Park View Drive North.

“The have found over 200 sites in the borough which could be developed without the risk of flooding and yet they still want to go ahed with this site.

“They accepted that the site flooded, but said it was not a problem because they would just build away from the area that has been flooding recently.

“It’s so important that we look at the long-term picture to make sure we are planning for the future. I don’t think they are taking enough notice of climate change.”

Former parish councillor Greg Elphick was pleased to see so many people turn out for the meeting and encouraged fellow residents to lodge their concerns before the consultation ended on March 20.

He said: “There was an overwhelming push from everybody – not least myself – to encourage everyone to submit a personal response in the hope that it gets somewhere.

“Anyone with a perspective needs to take part and we are trying to keep the emotion out of it.

“There is no infrastructure in Charvil. We have to go to Twyford and Ruscombe or into Woodley for a GP. We have a Nisa but that doesn’t even have a post office anymore.

The land west of Park Lane was already earmarked for development after Hicks Developments, of Woodley, was granted planning consent for 25 homes in 2016.

The borough council refused permission, but it was overturned on appeal.

Mr Elphick, 56, who has lived in Charvil since 2014, is a former police officer.

He remembers being asked to help the other emergency services during the flooding over the winter of 2013/14 and is surprised the land at Park View Drive North has been included in the draft local plan.

He added: “A few of us started door knocking and the level of awareness was abysmal. Almost 100 per cent of the people who we door knocked have said why would they build there because of the flooding problems. The local opinion is that it is a very poor choice of site.

“As soon as we realised the site was included we were all in shock because we know it floods.”

The parish council has also objected to this site, saying it has “major concerns about infrastructure, loss of countryside and, in some cases, flooding” when it comes to building more homes in Charvil.

This particular piece of land is owned by the University of Reading and the vice-chancellor Robert Van de Noort is also the chairman of the Thames Regional Flood and Coastal Committee.

Some residents feel this is a conflict of interest, but the university said this is not true. It also said the flood committee will have no influence over planning decisions.

A spokesman for the university said: “We are working with Wokingham Borough Council as part of their consultations on the local plan to suggest sites that could be used to build new homes.

“We are fortunate that we have world-class experts on flooding working here at the university. We would make sure that, on any development, we would make use of the best scientific and technical advice to cut flood risk to existing and new homes, and not make it worse.

“Part of our flooding expertise is about how local communities can contribute to flood resilience. We will listen to local knowledge and welcome the views of people living in the area.”