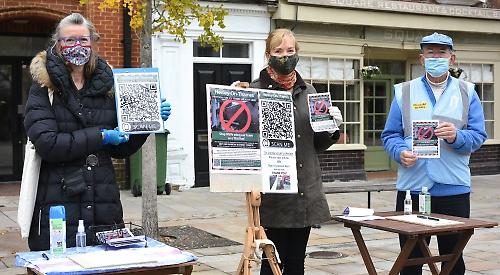 A WOMAN campaigning to ban heavy goods vehicles from using Henley as a “rat run” has been in the town centre drumming up support.

Amanda Chumas, of Bell Street, is calling for a 7.5-tonne weight restriction on vehicles with no business in Henley.

She is concerned about the safety of pedestrians and the impact on air quality and Henley’s historic buildings.

She needs the backing of Oxfordshire County Council, the highways authority, and is working with Councillor Stefan Gawrysiak, Henley’s representative on the authority.

The scheme would cost about £125,000 and would be enforced using automatic number plate recognition cameras and a database of legitimate road users.

Similar schemes are already in place in Burford and Chipping Norton.

Mrs Chumas has already gathered 1,400 signatures with an online petition and on Saturday she was in Market Place for four hours collecting more names on a paper version.

She was helped by air quality campaigner David Dickie, of St Katharine’s Road, and Helen Gaynor, of Baronsmead, and they collected 171 signatures. Mrs Chumas said: “The reason we’re launching the physical petition is because we feel that some people are uncomfortable signing online. We want them to be able to still have their say.

“My concerns started because of what I see every time I look out of my front door.

“I see these large 40-tonne vehicles going over the pavement and it is an accident waiting to happen. I’m very surprised someone hasn’t already been badly injured. What we’re trying to do is stop those HGVs which are using Henley as a river crossing, and have no intention of coming to Henley or the surrounding area to do business, and make them use the strategic road network.

Cllr Gawrysiak hopes to present the case for a weight restriction to the county council in the new year after he has had meetings with councils in nearby parishes such as Assendon, Nuffield, Shiplake and Stonor to rally support.

He said: “I’m hoping to get the parishes on board with our campaign.

“The next step after that will be me presenting my case to the county council.

“I am optimistic — I think we’ve got a very good case in terms of the heritage of the town, the danger to pedestrians and pollution.

“We’re not saying that big lorries aren’t welcome in Henley, we’re saying we want to get rid of the through lorries.

“If they’re delivering to Henley or within a five-mile radius, then there’s no problem at all.”

Mrs Gaynor said: “There are heavy lorries coming through Henley that really have no business here. They should be on the major roads and the motorways.

“This is about the history of Henley, the medieval buildings, the narrowness of the pavement, the danger to pedestrians and the pollution that they bring.

“It is a problem that we witness every day. It is something very real and is damaging the character of the town.”