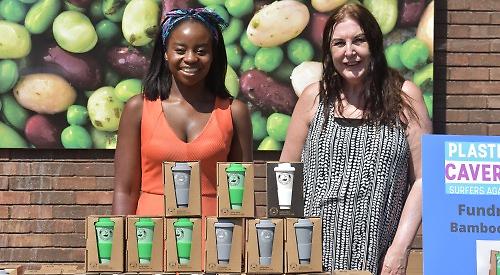 AN environmental group in Caversham has been selling bamboo cups to fundraise for a new water refill station.

Plastic Free Caversham, founded by businesswoman Anne-Marie Evans and Ayo Sokale in 2019, is trying to raise £3,000 for the station, which could be placed off Church Street near Waitrose.

The group has already received £145 of donations before launching its bamboo cup fundraiser last week.

Mrs Evans and Councillor Sokale, Caversham’s Labour and Co-operative member, sold 10 cups for £10 each at the Caversham Artisan and Farmers Market on Sunday.

The pair were only at the market for a few hours due to the hot weather.

The cups are also being sold at the Co-op store in Grove Road, Emmer Green, and will be sold again at the market on Sunday from 10am.

Cllr Sokale said: “It was fantastic engaging with people and getting donations as well. People really wanted to be a part of what we’re doing. The sale was a really great way to raise awareness and inspiring individuals to make changes in their own homes.”

Mrs Evans hopes to organise more fundraising events in the future such as putting together challenges for people or hosting a quiz.

She said: “It’s about putting pressure on the Government to install these refill stations everywhere as we’re a grassroots organisation fundraising for this.

“A simple thing such a water refill station in every little square across the UK would be useful because on hot days people run out of water quickly and if they can’t find a free refill station they will buy a cheap plastic bottle.”

Mrs Evans hopes that if the fundraising for the station is successful it will be the first of many. Her long-term goal is to make Caversham plastic-free.