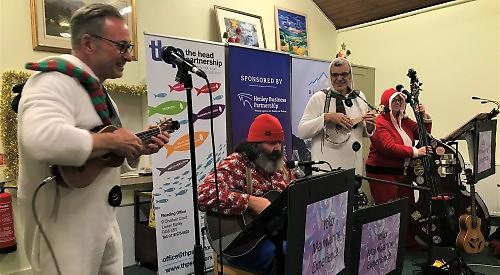 THE Mayor of Henley joined in a belly dancer’s performance on the sixth night of the town’s ninth annual Living Advent Calendar.

Councillor Ken Arlett was one of three spectators who took part in the show at the Spice Merchant restaurant in Thames Side on Friday evening.

He was plucked from the crowd by dancer and instructor Sheb Bamsey, who danced inside the restaurant and in its outdoor seating area following a performance by singer-songwriter Holly Shillito, who performed her own song Illuminate, Last Christmas by Wham! and George Michael’s Careless Whisper.

On Saturday, Felix, 12, and Didi Richardson, 10, played rock and pop songs in the main room at the town hall. Guitarist Felix and drummer Didi performed Never Gonna Give You Up by Rick Astley, Steady As She Goes by The Raconteurs and Merry Christmas Everybody by Slade.

She danced the salsa with the Salsa Bachata Social Club, from Reading, then other clubs performed in different styles including the bachata and Kizango. This was followed by a visit from Father Christmas.

The following evening the Yoko Mainwaring Experience performed popular festive songs at the Henley 60+ Club in Greys Road car park. Lead singer Martyn Cooper returned on Tuesday when he performed with his other band Jonny B and the Two Tees at Magoo’s bar in Hart Street.

This year’s Living Advent Calendar has so far raised £3,200.