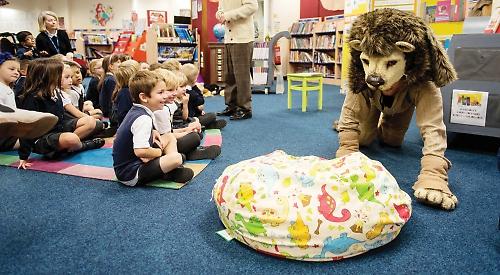 File picture of a library event before the pandemic began.

VOLUNTEERS who run village libraries in the Henley area are “frustrated” that they have not yet been told they can re-open despite the Government easing the coronavirus lockdown.

They are also concerned that Oxfordshire County Council, which is responsible for the services, is “strapped for cash” and fear any possible funding cuts could result in closures.

But the authority has said they are looking to re-open the facilities in a “phased way” which involves making sure each library is safe.

The Friends of Sonning Common Library group has written to Marian Morgan-Bindon, libraries and heritage service manager at the council, to find out when the Grove Road facility can re-open.

Chairwoman Jill Hutchinson said the library was an important asset for the community and provided villagers with a range of services.

She said: “Our frustration is the bigger libraries are opening now but small community libraries have not been given any kind of date or anything.

“We’ve been closed since the lockdown began and everything had to grind to a halt. We sent the council plans we thought we could put into operation even before the libraries open so we can be ready.

“We’ve got a small foyer area where people could return books without even going into the main body of the library. We’d only have one person going in at a time.

“At the moment we’re just frustrated about not knowing if we’ll be able to re-open. We know there are other friends groups that are equally frustrated.”

She added: “We’re sort of worried that in not having any indication about when we can re-open, the community libraries that are being supported by volunteers are being side-lined.”

She said: “It supports members of the community in so many ways. We provide IT support and help the aged and occasionally do tech sessions. We also run coffee mornings and children’s craft activities. It’s quite a busy little library.”

Ms Hutchinson is worried that the coronavirus pandemic will hit public finances so hard that small libraries could close.

“Our greatest worry is that this might mean the closure of community libraries.”

Vicky Jordan, who chairs Our Woodcote Library, hopes the Reading Road service can open next month.

She feels libraries had been “missed off the agenda” and were important for the range of services they provide in the community.

Mrs Jordan said: “I would say it’s essential. The library is the central hub of the local community. I think if we do not get a date, then one is always worried.

“People are missing it. I’ve had emails from people in the book club and they’re really missing the books.”

She added: “I would not have thought it would be difficult to do that. I think mid-August would give enough time and a chance to get organised before school term starts, which always presents more traffic.”

Anna Tilley, who chairs the Friends of Watlington Library, agreed with Ms Hutchinson about the need for libraries to re-open.

She said: “We are all longing for the day our library will open and take great heart from the phased re-opening of larger libraries within Oxfordshire. During this period, we will continue to support our library and the service.”

A spokesman for the county council said: “We are taking a measured approach to re-opening public libraries. Making sure all staff and the community are safe when they return to our buildings is the key consideration.

“Careful planning and considerable resource is required to open each site complete with the necessary covid-secure arrangements. With 44 libraries in Oxfordshire, this is a considerable undertaking — hence doing this in a phased way.

“We are considering how to open remaining libraries in conjunction with key partners and stakeholders. Initial conversations with friends groups will commence in the coming weeks.”