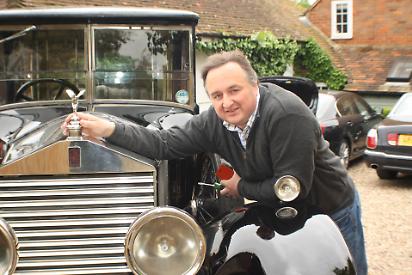 A CAR dealer who sold luxury cars belonging to his customers for more than £70,000 and used the money to pay his own business debts has been jailed for 18 months.

The court heard how Ashley-Carter, 50, agreed to sell prestige cars including an Aston Martin, Bentley and Ferrari, on behalf of clients in exchange for a small commission on the sales. But he kept all the money to save his failing business and told the owners that their cars were in storage or at other dealerships.

The customers did not find out until months or even years later that the cars had already been sold and no money had been returned to them.

The offences took place between 2010 and 2014 and totalled more than £165,000. Ashley-Carter also pleaded not guilty to another count, which has been left on his file.

The court heard how in late 2009 Ashley-Carter agreed to sell a Bentley Turbo R belonging to Anis Haggar for £20,000, taking eight per cent commission for himself.

A parking ticket for the car was also received by Mr Haggar’s company in 2010, with Ashley-Carter claiming he had taken the car to a prospective buyer in Luton.

In 2012 Ashley-Carter claimed the car was being stored in a “barn” but refused to disclose its location. He later told Mr Haggar that the car had been sold for £17,000, when in fact it had been sold in May 2010 for £21,000 to another prestige car company.

In November 2012, Mr Haggar’s assistant collected a cheque from Ashley-Carter’s garage for £14,000 which later bounced.

At around the same time, Ashley-Carter agreed to sell a 1962 Aston Martin V8 Vantage belonging to Robert .

Mr Huxter had previously owned an older Aston Martin which he traded in to buy the Vantage from Ashley-Carter for £43,000.

He had problems with the new car and returned it for repairs in 2012 before deciding to sell it and a price of £42,000 with Ashley-Carter.

Mr Huxter regularly tried to call Ashley-Carter and even drove to the garage to get the car back, where he was told it was with another dealer.

In December, Mr Huxter called Ashley-Carter to say he had found a buyer but was told the car had already been sold and Ashley-Carter was waiting for the money.

The Aston Martin had in fact been returned to a previous owner and Mr Huxter never received any money, despite also starting civil proceedings.

Ashley-Carter also agreed to sell a Maserati to one customer in part-exchange for their Bentley Continental.

They a price of £44,000 for the Maserati, part-exchanging the Bentley for £30,000. But after numerous phone calls, Ashley-Carter told the customer that the owner of the Maserati had changed their mind and no longer wanted to sell it.

When they asked for their Bentley back Ashley-Carter said he had found a buyer and taken a deposit of £10,000.

They agreed to sell the car for the previously agreed price but Ashley-Carter repeatedly dodged phone calls or claimed the car was being stored elsewhere and awaiting repair work.

In February 2013, he eventually admitted that the car had been sold and he couldn’t pay back the money as he didn’t have it following a “bad run of business”, leaving the customer £31,000 out of pocket. In September 2014, Stephen Whittaker agreed to sell his Ferrari Maranello for £50,000, with a five commission for Ashley-Carter.

Mr Whittaker contacted Ashley-Carter again in January, who said he had found a buyer and would have the money “soon”.

After several messages were ignored by Ashley-Carter, Mr Whittaker went to the garage where he was told the buyer was paying in two instalments and Ashley-Carter was waiting for the second.

After a second visit to the garage Mr Whittaker was told he would have the money by the end of April but by May he was still waiting and asked for either the money or the car back.

In June he went to the garage for a third time demanding the car back and was told it was in a storage facility. Ashley-Carter refused to say where the facility was due to “insurance reasons”.

Mr Whittaker demanded the car back or he would call the police and after a fourth Ashley-Carter again said he would have the money sorted in a few days.

The car had actually been sold the previous year for £71,000, with Mr Whittaker not receiving any payment.

The court heard how Ashley-Carter had been struggling with business debts since a downturn in trade caused by the recession.

He admitted to police that he used the £31,000 from the sale of the Bentley to alleviate some of his £50,000 debts at the time but he was planning to pay his customers back.

“He sold some, he maintained some and, in some cases, agreed to sell cars on behalf of their existing owners for a price usually agreed in advance. He would charge commission in exchange. Four of those cars were subject to that sort of agreement and were sold or, in the case of one, returned to the previous owner and no funds were paid.

“The legitimate owners of the cars either found out later that their cars had been sold or didn’t find out until the police were involved.

“People entrusted their expensive motorcars to him on the basis of verbal agreements.

“These being expensive, scarce and desirable vehicles it’s quite likely that their owners would be better placed than most to stand the loss.

“Nevertheless, it’s a significant loss to anybody and by my the value of the indictment is £165,500.”

Ashley-Carter had a long career in prestige cars, working with his father Graham until 2000 before branching out on his own.

It was under these companies that both the Bentley Turbo R and the Bentley Continental cars were sold.

The companies later went into liquidation, with Ashley-Carter claiming a former employee had stolen from him and others had diverted business elsewhere.

He began trading through a third company, Performance and Prestige Cars Ltd, in 2013. In August last he was declared personally bankrupt.

Graham Bennett, defending, said Ashley-Carter, who is married with two teenage children, was an expert in his field but began to struggle following the recession when many people began to spend less money on luxury items like prestige cars.

He said: “In common with many who had their own business during the beginning of the recession things became difficult, especially with prestige motor vehicles.

“People weren’t willing to trade their vehicles at the same rate as before and were reluctant to spend money restoring them to the standard they would have prior to the recession. That had a significant impact on the business.

“In seeking to maintain the business Ashley-Carter looked to family and his father-in-law provided a significant loan in 2011 which allowed the business to continue.

“He was optimistic that he could trade through this recession but sadly this was not the case. Although he managed to service that loan, business did not pick up.

“Individuals were lied to about their cars. They had been sold and the proceeds put into the business to support it in the hope and optimistic expectation that he could keep the business going, trade through a difficult environment and pay the people he owed this money to.

“The proceeds the sales were used to support his business on a temporary basis, expecting to trade through and be in some position in the future to be able to pay the funds back.

“There is no evidence that the money derived had been used for personal gain and spent to support a significant lifestyle. It doesn’t show a man who goes off on holidays, stays in expensive hotels and lives the high life. He is now at his lowest ebb, facing court having to accept the way he ran this business was fraudulent. During the course of his efforts to trade the business out of a dire financial he made these representations which were false.

“He is in no sense proud of his behaviour and conduct. He put his head in the sand and should have had his eyes open much sooner to the reality the situation.

“His optimism was misplaced in a difficult trading environment. He has maintained an acceptance of responsibility that he owes this money.

“There are still plans to make restitution to those that have lost out in this case.”

Mr Bennett added that Ashley-Carter’s wife had accepted an offer on her late father’s house and planned to use the proceeds to pay back the customers.

Judge Zoe Smith, who spent almost 45 minutes considering her verdict, said Ashley-Carter should have “gone no further” after failing to pay back Mr Haggar and that he would have known he would be unable to pay back the other customers.

She said: “In 2011 you had received a loan from your father-in-law but none of that money was used to reimburse Mr Haggar.

“Since you were unable, due to cash flow, to pay the first customer you would have known it was very unlikely that you would pay the others and you were using their valuable assets to keep your business afloat.

“This was a sustained fraud and we are dealing with four victims. Your dealing was grossly improper.”

Ashley-Carter bowed his head in the dock as he was sentenced to 12 months imprisonment for the first count and 18 months each for the other three, to be served concurrently. He will be eligible for release after nine months.

No compensation order was made as Judge Smith found it unlikely that Ashley-Carter would be able to pay it.