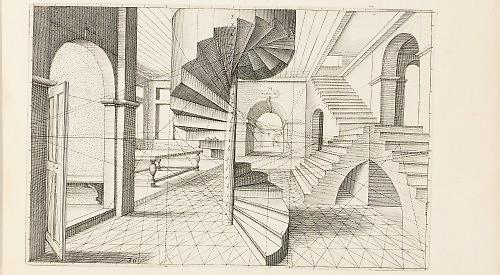 THE recent picture of a black hole in a galaxy far, far away may have looked like a simple photograph but it wasn’t, of course.

Rather it was the product of information painstakingly stored in a half a ton’s worth of hard drives and then assembled like a monumentally complex jigsaw.

Thinking 3D, the intriguing exhibition currently on show at the Bodleian’s Weston Library, delves back hundreds of years to reveal how human beings have tackled the problems of representing objects which are distant or complex or even hidden from sight altogether.

We experience things in three dimensions (four if you include time). How then do you “translate” those things onto the flat two-dimensional surface of a page? This question matters in at least four areas: abstract shapes, architecture, astronomy and anatomy.

Leonardo da Vinci was one of the first people to recreate in 2D what he saw or imagined in 3D. The only illustrations he did for a book published in his lifetime are of geometric shapes. On display here is Leonardo’s icosidodecahedron — that’s a shape with 20 triangular faces and 12 pentagonal faces. Can’t imagine it? Leonardo could and so he drew it. And George Hart, a geometric sculptor, has made a wooden model of it.

Exhibition visitors can also riffle through the pages of the Leicester Codex — pages from one of Leonardo’s notebooks — in an interactive display. Bill Gates bought the real thing for more than 30 million dollars in 1994.

How to depict the vast distances of space? In the 17th century Robert Fludd produced a book on cosmology. One of the pages is engraved black. Round the white margin there’s a Latin inscription which reads “and so into infinity”.

Architects need to visualise buildings inside and out, from above and below. Early illustrations here show that building design is a blend of art and geometry. Anatomists and budding doctors need to look inside the human body. Here are precise pictures which literally peel off the top layer to uncover the one beneath.

Thinking 3D runs until next February. It is an exhibition which is both absorbing and revealing.