Welcome to our Lockdown Lodge 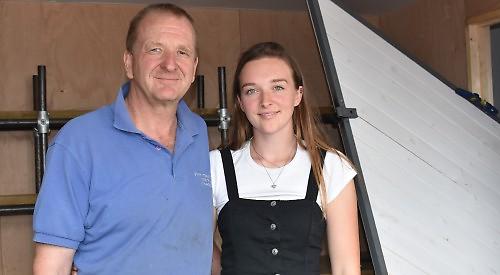 A GAP year student is to launch a pop-up café, bar and restaurant by the Thames near Henley.

The Lockdown Lodge, which is due to open next month, will be made from four converted shipping containers placed by the Thames Path on the south bank near Hambleden Lock.

It is the brainchild of Minna Hughes, who lives nearby, with the help of her father Chris, whose business supplies catering kitchens for large-scale functions.

The 19-year-old came up with the idea after her travel plans were cut short because of the coronavirus pandemic.

Miss Hughes had to race home early from volunteering in Botswana to avoid becoming stranded abroad as airports began shutting and also had to scrap a planned trip to Canada. When she got home, she discussed it with her father, who is managing director of Event Kitchens in Binfield Heath but has no work at the moment due to cancellations caused by the covid-19 restrictions.

Mr Hughes already had the containers in his storage yard and is currently overhauling them while his daughter is organising the food, staffing, marketing and other aspects of the business.

The containers will be transported to the site on lorries and lifted into place using a crane a few days before the opening on August 10.

They will be arranged end-to-end in two rows to form one 40ft long building. The ground floor will function as a kitchen serving simple takeaway food such as burgers and hot dogs as well as hot and cold drinks.

The upper floor will be a fine dining restaurant accessed by stairs and will have a marquee covering and balconies draped with trailing flowers.

Takeaway customers will have to queue for their food while observing social distancing measures. They can eat outside at picnic tables arranged at a safe distance.

The restaurant will offer a set menu of either four or five courses. The number of covers is yet to be decided but will comply with government rules for hospitality businesses.

The food will be provided by London chef and caterer Jimmy Garcia, for whom Miss Hughes has worked, and the ingredients will be sourced locally where possible. Mr Garcia was happy to be involved as he has been forced to cancel plans for a similar venture in the capital.

There will be a licensed bar selling beer and wine providing the licence applications are agreed by Wokingham Borough Council. The pair propose to be open daily from 11am to 10.30pm, seven days a week. The land belongs to the Copas Partnership.

Miss Hughes, who designed the look of the venue, is also being helped by her brother Barnaby, 17, who is building a website, and her mother Lisa, who used to work in marketing.

She will also draw on her experience of running a mobile event catering firm from a converted trailer belonging to her father.

The Lockdown Lodge will trade for about a month before she begins studying a primary education degree at Oxford Brookes University.

Miss Hughes, who attended Frieth Primary School and Sir William Borlase’s Grammar School in Marlow, said: “It has been quite a chaotic year. I’d been working as a nanny for a family in Highmoor before I went out to Botswana and I was only out there for two months before the coronavirus hit.

“Dad had a lot of his work cancelled and we were thinking about what we could do. I’ve always loved to cook and bake and I think Jimmy does amazing things so I thought we could do something in this lovely part of the world.

“We were umm-ing and ahh-ing in the early part of the lockdown but as things started opening up and the future looked clearer we thought, ‘Right, let’s do this’. There’s no such word as ‘can’t’.

“People will be able to go for a walk then stop for lunch or some drinks with us or have dinner with a view.

“We’re making it into a real destination to make up for the summer that we’ve lost to the pandemic.

“We’re hoping it will rain as little as possible but anyone up on the terrace will be protected and they’ll enjoy a slightly higher view over the rushes and into the river. It’ll be gorgeous on a good day.

“The work is ongoing but we’ve built parts of it and everything is on the right track.

“Copas have been amazing to work with and gave us the go-ahead after I presented a full proposal.

“It’s a very fluid situation because of the changing guidelines so we have to be flexible and not put anyone at risk.

“Some of the details will have to be decided nearer the time as we don’t know what the situation will allow. We don’t yet have to wear full face shields but we’ll be keeping an eye on that.”

She added: “It will be exciting to get it up and running.

“It’s a little bit daunting considering that we’re doing this by ourselves and I’m only 19 but it’s all going to plan.

“Dad has been very helpful, as has the rest of the family. It has been nice working with them on it.

“It’s new territory for all of us but it will be good experience.

“Hopefully lots of people will come. I know I’ve missed seeing my friends and going for a barbecue, to the pub and things like that.

“I really want to give people a safe place to enjoy getting together.”

Mr Hughes, 54, who has worked in the industry for 15 years, said he was proud of his daughter.

He said: “It seemed like a great idea because we had all this equipment sitting around doing nothing.

“Minna’s had a bit of a rough time with all her plans being wiped out and this was a good way to make the most of the time.

“A lot of landowners weren’t interested in the early days because it looked like the major events were still going to happen but they became more amenable when they were all cancelled.

“I have to say Copas have been fantastic and very helpful.

“All dads think their children are wonderful, of course, but Minna has always been the kind of person to get things done. When I converted the trailer for her last year, she finished a presentation on how the business should run on the same day.

“It’s a challenging location but we’ve worked at sites in central London with no vehicle access so I’m used to dealing with that kind of thing.

“I’m happy to do what I can behind the scenes but she has a great team behind her and I know she’ll put her heart and soul into it. It’s in a stunning location and it will be a success without a doubt.”