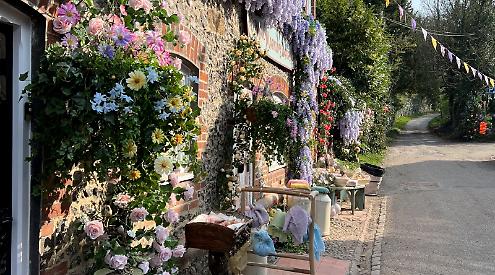 HAMBLEDEN was given the appearance of a fairytale village for the shooting of a new Disney movie, writes Albert Tait.

Many of the buildings had signs over their doors, such as “Lumiere Candle Works” and “Fairytale Fondants”.

The village was being used to shoot Disenchanted, a sequel to the 2007 hit film Enchanted.

The film stars multiple Oscar nominee Amy Adams, who was in American Hustle and Arrival, and Patrick Dempsey, who was in Grey’s Anatomy and Bridget Jones’s Baby (2016).

The production crew spent six days in the village, which has been used as a TV and film location many times previously. Muffin Hurst, who lives in Hambleden, said: “As a village, we were quite nervous because we had had some filming a few weeks previously and it can disrupt the village quite a bit.

“However, they made every effort to accommodate all the locals and once they started putting up all the flowers it just looked so pretty. You couldn’t help but drive through and smile — it was just gorgeous.”

Ruby Smith, who works in the village post office, said: “The whole village was turned into a magical Disney-land with flowers everywhere.

“Quite a lot of the walkers and cyclists coming through the village thought that spring had come early.”