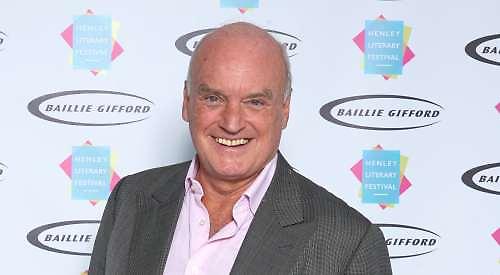 CONDÉ NAST publishes many of the world’s most glamorous magazines and Nicholas Coleridge CBE has been editor, vice president, managing director and chairman of various divisions since 1989.

He is also the chairman of the Victoria and Albert Museum, a position he has held since 2015.

I attended his talk on his memoirs The Glossy Years: Magazines, Museums and Selective Memoirs at the Henley Literature Festival.

Nicholas was interviewed by Jo Elvin, editor of You magazine. As the former editor of Glamour magazine she was both an employee and a colleague.

Their warmth towards each other and shared knowledge of what it was like back then brought a certain cosiness to the room. Nicholas himself comes across as clever, energetic, charismatic, hard-working and focused.

When asked about writing his memoirs he shared how he pondered the idea for a few days. He did not want to come across as vain, needed to feel it was the right time for him to write it, and if he were to write it then it had to cover career, home and friendships.

In the end, legacy and the desire not to forget helped him to commit to writing the book.

I was struck by his clarity and focus in how he approached the writing. He decided to write 30 chapter headings to organise his 40 years of memories. This would be no easy feat. His many diaries allowed him to check that he had the correct dates for when things happened.

It’s a tricky thing including other peoples’ stories in your story without their permission. Nicholas joked that in the 10 days since his memoir had been out, he’d not received a writ as yet. There is no doubt he is brave to write about former girlfriends, politicians, business tycoons and celebrities in an age of personal brand.

Nicholas came into contact with what was then Harpers & Queen, now Harper’s Bazaar, during his teens. He remembers liking everything about them — the sheen of the paper, the images, the covers and having a mix of witty and serious writing.

He would later send in an article — how to survive teenage parties — to have it published and bought! This seemed to seal his passion for the genre.

His career coincides with a massive expansion in magazine publications and sales. Some of this growth reflects a changing world with more countries, such as Russia, China and Japan, growing a luxury clientele.

From what was shared in the talk I know there will be many hilarious and insightful stories in the book.

He shared details of being a weekend house guest at the same time as Bob Geldof and his then girlfriend, plus Conservative politician William Hague and his wife.

It’s a funny story that surprises many in quoting Geldof as wanting the Conservatives to win the impending election.

There were other stories involving the larger than life fashionista Isabella Blow and her sometimes poor grasp of reality, and “S.I.” Newhouse with his desperate desire to transfer air miles from one of his pug dogs to another!

There are more glamorous stories involving Kate Moss and Princess Diana amongst others.

The book also includes more serious episodes. Nicholas shared the time when he was being sued by Mohamed Al-Fayed and how close they came to having a day in court. In the end, once the lawyers saw the affidavits, they realised it would be better to settle.

More recently, Nicholas has been the chair of the Victoria and Albert Museum. He painted a parallel universe between the world of magazine publishing and the world of museums.

In both there are departments competing against each other whether for prestige or cash. In both, whether sales or footfall, public consumption is targeted and measured.

So now, as he did then, he gets his key figures at the end of each working week and this will shape his decisions going forward.

When audience members had a chance to ask questions they were curious about his views on the future of magazines and the hiring of Edward Enniful.

For his part Nicholas believes that magazines will continue in his lifetime with luxury brands holding their position. As in other business sectors, however, the success would be in the niche.

With regards to the editor of Vogue, Edward Enniful, he saw this as a wise choice and celebrates the fashion bible’s continuous growth. He confirmed that the September issue edited by the Duchess of Sussex Meghan Markle sold “terribly well”.

It was the final question that seemed to bring the whole talk and Nicholas’ life into focus. He was asked what drives him?

This is a popular question at many women in business events that I have attended but it was obvious that he’d never had to think of his career from that perspective.

His answer was twofold. If he wants to do something, he’ll put himself forward for it. If he gets to do it then he’s driven to do it well as he “doesn’t want to muck up or get it wrong.” And, like Richard Branson, he is happy to hire and retain clever people who are “stimulating and make life easier”. Success simplified.