Lodger who knows no boundaries 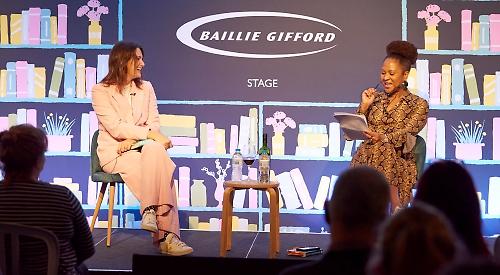 SATURDAY’S programme of events concluded with Elizabeth Day, journalist, novelist, and host of the popular podcast How to Fail in conversation with Sara Collins, author of The Confessions of Frannie Langton and winner of the Costa First Novel Award 2019.

The pair had the challenge of warming up a decidedly soggy Baillie Gifford Marquee at the end of a long and drizzly day, however they rose to the occasion and their enthusiasm and genuine desire to gain a deeper insight into each other’s work created a cosy atmosphere that drew the audience into their discussion. After an introduction brimming with compliments, Collins began the hour by inviting Day to discuss her latest novel Magpie, which the Guardian described as “a tense, stylish drama” and the i as “a compulsive motherhood thriller with an electric twist”.

Day explained that her fifth novel explores the strain placed on a couple’s relationship when they take in a new lodger who has little regard for personal boundaries.

The novel’s key themes of fertility issues, motherhood and womanhood were made clear in the encounter between the focal character, Marisa, and her boyfriend’s imposing mother, Annabel, which Day read aloud to the audience.

Annabel’s thinly veiled contempt for Marisa gave us a flavour of the tensions that run throughout the novel, the ominous nature of their meeting furthered by Marisa’s perception of the glamorous older woman as “a giant bird, a pelican maybe or an ostrich, a bird with beady eyes and an intrusive beak and an edge of malicious intent”.

Day explained that her own experiences of miscarriage and the stigma surrounding the topic — which she has written about extensively in her non-fiction work — compelled her to write the book, remarking: “I hadn’t seen fertility struggle represented in the way that I think I would have liked to have read it when I was going through it.”

Later in the evening she returned to this idea, saying: “I wanted something to exist both in How to Fail and Magpie that was a testament to something that had been, that was a process, that was an experience and that’s what I have to show for it. That’s why I say Magpie came from my heart and my guts and I’m really really proud that it exists.”

Collins praised her for using the novel to interrogate the construction of womanhood as reliant on motherhood and noted that Day is particularly unique for her interest in presenting fertility issues from a male perspective.

Citing Gillian Flynn’s Gone Girl and TV series The Affair as inspirations, Day explained that she has always been interested in unreliable narrators and viewing events from multiple perspectives.

She observed that, for parents struggling to conceive, “there’s already a hierarchy there because a partner doesn’t experience the physical intrusiveness of fertility treatment or the physical pain if it doesn’t work out ... in many ways it’s almost harder.”

Faced with an interview guest with such an extensive career which spans both fiction and non-fiction, it is fair to say that Collins had a difficult task assigned to her.

However she managed to segue sensitively from an exploration of the pain of miscarriage on to a discussion of Day’s podcast without undercutting the gravity of the topic.

Graciously dodging Day’s questions about her own novel, she kept the audience engaged and primed for the Q&A at the end of the session.

Like many audience members and indeed the speakers themselves, my only complaint at the end of the session was that the hour had whizzed by and seemed too brief a time slot to discuss these poignant issues that are so rarely explored in the medium of fiction.