From supermodel's chef to Henley cafe 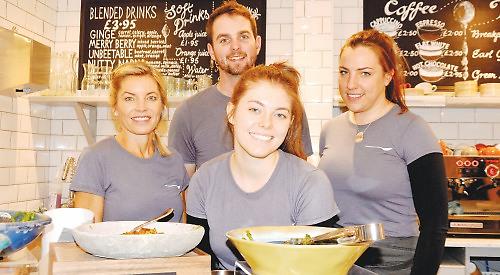 HE has been personal chef to media magnate Rupert Murdoch, a MasterChef semi-finalist and head chef at the British Museum in London.

But Greg Lewis says he has found his true calling working at Henley’s newest café and delicatessen.

The 41-year-old is head chef at Spoon, which opened at the former Noa Noa womenswear premises in Duke Street in November.

Owners Paul and Cindy Gillett, from Remenham, offered him the role soon after they bought the premises in February last year and plan to sell him a stake in the business.

Mr Lewis, who also used to be head chef at Phyllis Court Club, says he is happy to have free rein and is looking forward to the business expanding.

“I’m very lucky to have met Paul and Cindy as it has opened up such a wonderful opportunity for me,” he says.

“The goal is to make Spoon as profitable as possible over the next few years. We’re looking at expanding to towns with a similar demographic to Henley but haven’t made any commitments as it’s all about finding the right property at the right time.

“We need to complete our first full year to get an idea of where we’re standing. Until we’ve done a full summer and the beginning of another winter we can’t be sure that it’s the right time to focus on growth. If we do decide to press ahead, it will happen very quickly.”

Mr Lewis, who lives in St Andrew’s Road, Henley, grew up in Leicestershire and took an interest in cooking while at school.

He came second in the Sainsbury’s Young Cook of Britain competition in 1991, when he was 15, and a year later reached the semi-final of the BBC’s MasterChef.

Shortly afterwards, he moved to London to begin a five-year apprenticeship in classical French and traditional English cuisine at the Connaught Hotel in Mayfair.

Mr Lewis says: “My mum and dad are good cooks and have always liked to eat out so I developed an interest from that.

“We did home economics at school and when those competitions came around I would spend time practising for them. I also washed up at a local pub from the age of 12 and would help in the kitchen occasionally, which was good experience.

“My time at the Connaught was a fantastic education. There were 50 chefs in the kitchen, which you don’t really see any more, and it was a highly specialised environment so you could spend several months perfecting a particular skill, such as preparing meat or fish.”

After completing his apprenticeship, Mr Lewis spent a decade working as a chef at a small family-run hotel in Epsom. He took three months off to work at the French Laundry restaurant in California, which holds three Michelin stars.

He says: “I was allowed the time off, which was wonderful, but I was going to take that opportunity whether I had a job to return to afterwards or not.

“It was absolutely amazing. They only ever used the freshest ingredients, which is an approach I’ve always incorporated into my own work.”

Mr Lewis moved to Henley when he took the job at Phyllis Court Club in 2007.

He says: “I’d been in Epsom for a while and, as often happens, you take a restaurant as far as you can before you start looking for new challenges. I enjoyed my time there but the moment was right to move on.

“The job was advertised as a banqueting role for large groups, which wasn’t my thing at all, but at the interview they said the sous chef would deal with that and I could focus on improving the dining to the highest possible standard.

“It proved to be a great job but again, after seven years, you realise it’s not the kind of thing you’re going to retire into.”

He recalls: “It was a vast operation and not my type of cooking whatsoever, though it was a very interesting 18 months. I had dozens of managers above me controlling the purse strings and demanding an 85 per cent gross profit margin, so I had to buy poorer quality ingredients.

“At Spoon, our focus is on quality and value rather than running it like a money machine. The margins aren’t anywhere near as high but there’s more creativity and you don’t have to stick rigidly to the same recipes.”

He left the museum in late 2015 to work as a freelance chef organising dinner parties in clients’ homes and returned to Henley.

He met Mr Gillett at Castle Royle Golf Club, near Maidenhead, where they are both members, and at the club’s annual charity auction Mr Gillett successfully bid for his services for an evening.

Last summer Mr Lewis worked as provate chef to Mr Murdoch and his new wife Jerry Hall’s on the recommendation of a former colleague.

He catered for the couple at their home in Richmond almost every day and ran the barbecue at the former supermodel’s 60th birthday party in July.

He says: “It was your typical family dining — their tastes at home are pretty simple but they’re very busy and needed someone to do that stuff for them.

“Jerry’s youngest son Gabriel is dairy and gluten intolerant so I learned a lot about cooking with substitute ingredients, which was useful.

“They’re fantastic people, one of the most wonderful families you could come across. They’re absolute diamonds.”

Now he manages to juggle his work at Spoon with catering for high-end dinner parties.

He says: “I’m lucky that I can still do the private work to keep my hand in. It’s challenging balancing those demands, especially at certain times of the year, but I’ve got a good client base and I always fit those commitments in where possible.

“I’m currently doing about two or three parties a month but I could do a lot more over the summer, depending on demand and the pressures at Spoon, which is my first priority.”

At the café Mr Lewis is responsible for sourcing ingredients, designing and updating the menu and preparing the food each day. He does most of the cooking at an off-site kitchen near the Gilletts’ home but the café has a facility for heating up food and preparing sandwiches and salads.

The café sells coffees and blended drinks plus a range of cakes and salads, sandwiches, hams, olives and cheeses as well as breakfast.

The Gilletts recently applied for an alcohol licence so that Spoon can hold tapas evenings at which wine would be served and have also been granted planning permission to put tables and chairs outside.

“It’s been a very positive experience so far,” says Mr Lewis. “We got through what many would consider the hardest months as the run-up to Christmas and the early New Year are very quiet and not the best time to be opening a café.

“The vast majority of feedback is positive and, from walking around town, we seem to have more customers than other cafés even on a quiet day. I think we’ve got the place just right — it’s a beautifully designed space and our menu changes enough to keep people interested.

“We’ve found a good gap in the market because we’ve got the best suppliers and ingredients and charge the right price. It’s not specifically ‘diet’ or ‘health’ food but it is healthy, simply done and with nothing unnecessary added.

“There’s definitely a market for independent businesses here as people are very discerning. They know exactly what they want and plenty of traders have come and gone because they’ve tried to get clever or pull the wool over people’s eyes.

“If I served a bad meal at Phyllis Court, I would have hundreds of people telling me about it. This is an affluent area, which goes hand in hand with that high level of knowledge.

“For example, people know which wines pair well with certain foods and if you charge over the odds you’re just insulting the customer. They’re bound to have good wine at home and they know what they’re paying for.

“It’s challenging because we aren’t big enough to have any other chefs so everything falls to me on the food front.

“I have to keep the menu interesting but manageable on a Saturday morning when there are dozens of people who want to be served as quickly as possible.

“However, I like to keep things seasonal and it’s nice to have the authority to just change things.

“It’s great to be involved in a business that’s going places. We’re not stopping at one branch because Paul and Cindy are ambitious and talented business people.

“Hopefully, we can have a franchise in some other nice market towns, which is the grand plan.”