Rodney Bewes, television actor with a passion for rowing 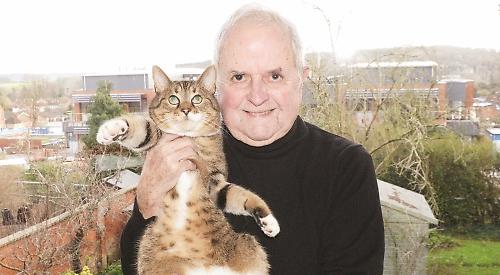 ACTOR Rodney Bewes, who lived in Henley, died on Tuesday.

The 79-year-old widower and father-of-four, who lived in Hop Gardens with his pet cat Maurice, was best known for playing Bob Ferris in the BBC sitcom The Likely Lads and its follow-up Whatever Happened To The Likely Lads?

Announcing the news on Twitter, his agent Michelle Braidman said: “Rodney was a true one-off. We will miss his charm and ready wit.”

Bewes was born in Bradford, West Yorkshire, on November 27, 1937, and spent his early years in nearby Bingley before moving with his family to Luton, where he attended Challney Boys’ School.

He first appeared on television at the age of 12 after successfully auditioning for two roles in the BBC’s Children’s Hour plays.

He moved to London at 14 to attend the Royal Academy of Dramatic Art’s preparatory school and later attended RADA after completing his national service with the Royal Air Force.

However, he was expelled during his final year for repeatedly falling asleep in class as he was working night shifts as a cleaner in hotel kitchens to finance his studies.

Bewes then began appearing in repertory theatre and landed early supporting roles in the Dixon of Dock Green and Z-Cars and the 1963 film adaptation of Billy Liar in which he starred alongside his friend and then flatmate Tom Courtenay.

His appearance in the latter landed him his signature role in The Likely Lads, which ran from 1964 until 1966. His character, an ambitious and upwardly mobile Newcastle factory worker, stood in contrast to the more cynical Terry Collier, played by James Bolam.

Bewes later appeared in ITV’s Man in a Suitcase, Father, Dear Father and Dear Mother... Love Albert, the last of which he co-wrote, and was also the first presenter of The Basil Brush Show when it launched in 1968.

He reunited with Bolam for 1973’s Whatever Happened To The Likely Lads?, which was followed by a film adaptation in 1976. He later appeared alongside Michael Palin in the 1977 fantasy Jabberwocky and in the 1984 Doctor Who serial Resurrection of the Daleks.

During the Eighties and Nineties he performed on the stage, winning the Stella Artois Prize at the 1997 Edinburgh Festival Fringe for his one-man production of Three Men In A Boat. He made his final television appearance on an episode of ITV’s Heartbeat in 2009.

When he published his autobiography A Likely Story in 2005, he claimed he had not spoken to Bolam since the mid-Seventies after he revealed his former co-star’s wife was pregnant in a press interview.

The pair never spoke again and Bolam has refused to allow the programme to be repeated.

This week Bolam denied the allegation, saying he remembered Bewes “with great warmth” but they were never able to meet due to clashing commitments.

Following a short-lived first marriage which ended in divorce in the early Sixties, Bewes married his second wife Daphne in 1973.

They met when she was a waitress at Grumbles restaurant in Pimlico, where he would go with Courtenay and Likely Lads co-writer Ian La Frenais to ogle the young female staff.

Later, when Bewes appeared on This Is Your Life, the friends joked about seeing the waitresses bend over the tables to serve apple crumble while showing their knickers of the same colour as their mini-skirts. They saw these woman as “impossible to pull” but he succeeded.

The couple were wed at Fulham register office next to Stamford Bridge, the home of Chelsea Football Club, of which Bewes was a lifelong fan. Their wedding breakfast was held at the White Elephant on the River Thames, where the cake bore the message: “TV star marries shop girl.” They had four children, daughter Daisy and triplets Joe, Tom and Bill, and continued to live in Putney for more than 25 years, where Bewes rowed for London Rowing Club.

They moved to Henley in 2000 and Mrs Bewes died in the spring of 2015 following a sudden stroke.

The couple forged links with Henley in the Eighties, when Bewes met and befriended Upper Thames Rowing Club’s late founder Peter Sutherland and his wife Diane.

He would often visit the couple at their home next to Henley Bridge, on the banks of the River Thames, and moor his collection of traditional wooden boats there.

He was a regular visitor to the town during the royal regatta and Henley Festival, during which he would moor up at the booms on the course and watch the racing or listen to the performances.

Mrs Sutherland said: “He was always very interested in rowing because he found it helped his health. He would often stay here so he could go out on his boat and I remember those times very fondly.

“He was a lovely man and we would always share a joke together — there was no end of laughter around him.

“I was very saddened to hear of his death and am kicking myself as we hadn’t spoken in a while due to my own health.”

Artist Bill Mundy, who lives off Wargrave Road, met Bewes through the Sutherlands and painted a miniature watercolour portrait of him in 1989.

He also lent him a dinghy for his performance of Three Men In A Boat at the town’s Kenton Theatre during the Nineties. He said: “He was a real man of the river. Everyone knew him for sitting in the middle of the Thames while watching the crews go by.

“I did the portrait of him as well as a pencil drawing because I thought he had a good face for it and he liked it very much.

“He was such a nice, kind guy and I think it’s such a shame that he and James Bolam never spoke again after appearing in such a famous programme.”

Four-time Olympic gold medallist Sir Matthew Pinsent expressed his condolences on Twitter, saying: “Rowers will remember him sitting on the booms at Henley in his London Rowing Club cap and blazer, clapping every crew past. Every one, every day. Will miss you, Rodney!”

In 2009, Bewes campaigned to stop a new razor wire fence being erected at Friar Park, the home of Olivia Harrison, widow of Beatle George.

He claimed the fence had severely injured Maurice and cost him thousands of pounds in vet’s bills.

Mrs Harrison had applied to South Oxfordshire District Council to renew 985m of the 2ft fence, which backs on to Hop Gardens, but eventually replaced it without the wire.

In 2012, Bewes was featured in the 100 Faces of Henley book, which featured photographs and biographies of noteworthy residents and was sold in aid of various good causes in the area.

Last year he criticised the redevelopment of Townlands Hospital, saying the new three-storey building looked “like a factory” and blocked his view of greenery on Remenham Hill.