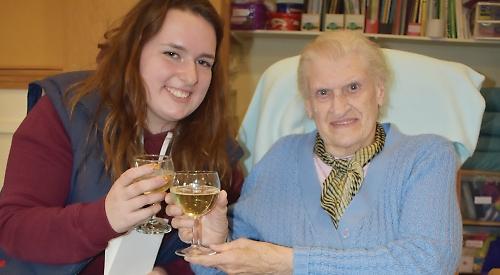 A DAY care service which helped elderly people with dementia has closed after about 20 years.

The Bluebells community club held its final session at the Christ Church Centre in Henley on Thursday last week.

It was run by Age UK Oxfordshire but was one of six out of eight clubs earmarked for closure following cuts by Oxfordshire County Council, which is responsible for adult social care.

At the farewell party, staff and volunteers were presented with flowers and guests enjoyed glasses of fizz and cake.

Group manager June Wayman, who had overseen Bluebells for more than four years, said: “It’s a shame that things couldn’t have carried forward because there’s a big need for it in Henley. There’s nothing quite like it in town.

“I’m absolutely gutted but there are lots of happy memories to take with me. I love everybody dearly and we have become such good friends — we have had lots of fun and laughter.”

Bluebells went from four sessions a week to two in September but continued to cater for about 15 clients.

Mrs Wayman said: “It provided safety and reassurance. Families knew their loved one was safe and well looked after.”

Violet Hobbs, from Henley, who has used the service for about six years, said: “I feel sad — I’ve got to know everybody.

“It’s that friendship — you can’t beat it. I live on my own because I lost my husband so I’m glad of the company. The girls that look after us are wonderful. It seems a shame that it has got to finish.”

Cathy Dean said Bluebells had helped her father Brian Verity, from Emmer Green, who had been a member for about a year and enjoyed the company.

She said: “This is sad for people who are vulnerable. They have got to find somewhere else to go but it’s hard for them to adapt to change.

“For me the benefit is it’s a day when I know my father has got company and I don’t need to worry about him so much.” Ellie Grant, 17, a student at The Henley College, has been volunteering at Bluebells for 10 months through the National Citizen Service.

She said: “When I came in I loved it so I carried on and I’ve become friends with all of them.

“Everyone here is very friendly and kind and it’s always nice to have a laugh. It’s a massive shame that it’s closing but I’m going to carry on and visit people.”

Rev Glyn Millington, the minister at Christ Church, said: “This is a sad day. Bluebells has been a second home to some — it’s part of their daily routine and when there’s a change it’s a challenge.

“They have become part of the church family and the centre community, if you like, and we have had some good times. It offers time away from their home in a safe environment where they can have some fun with other people and it offers their carers a few hours’ respite because that’s really important.”

Rev Millington has helped to set up a new group to provide support to dementia sufferers and replace some of the services offered by Bluebells.

The Memory Café will be held at the Christ Church Centre every Wednesday from April 18 from 10.30am to noon. It will cost £2.50 for tea, coffee and homemade cakes and there will be activities including quizzes, crafts, games and singing.

Rev Millington said: “We can’t offer the same kind of respite care that Bluebells has been able to offer but we can offer a safe environment.

“We are aware there is a need for a provision of services for people suffering with dementia. It’s a hidden problem because you don’t see these people roaming the streets.

“This will give people a few hours out of the home to meet other people and give a bit of respite to their carers, who have the most desperately difficult time and live with it 24 hours a day.”

Age UK Oxfordshire attempted to maintain all eight of its clubs by changing the way it ran them, reducing costs and increasing income by encouraging more users and raising fees. It also made use of the county council’s £98,000 “transition” fund, which was introduced after it cut grants to 47 day schemes.

However, the charity decided it could only continue running two of its community clubs.