Keen athlete or beginner, they’re at your service... 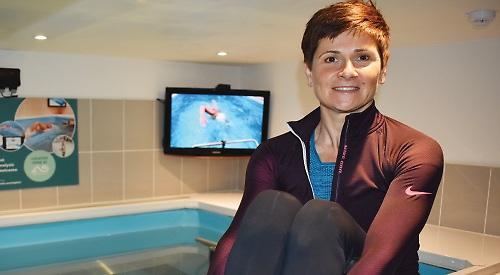 RUNNERS, cyclists and swimmers in the Henley area are reaching new peaks with the help of Athlete Service.

What started as a small business offering bike servicing and set-up advice for athletes has become a one-stop shop for coaching, personal training plans and all manner of equipment for those who enjoy exercise and keeping fit.

The business, which is based at the Oast House in the Greys Road car park in Henley, aims to provide a complete service at all levels of cycling and triathlon to improve every aspect of an athlete’s

But it welcomes men and women of all ages and sporting abilities.

Mr Griffiths, 39, started Athlete Service in 2007 from his living room in Deanfield Road when he was still rowing for Leander Club.

He started servicing friends’ bikes from home and, as custom grew, he moved the business to a unit at the old Highlands Farm industrial estate off Greys Road in 2010.

It was here that he first met Mr Plant and in 2011 the men began to work together, rapidly expanding the services on offer.

The following year they moved the business to Henley Enterprise Park, off Greys Road, and in 2014 they relocated to the Oast House, a former nightlcub, as there was four times the space available.

Now Athlete Sevice comprises a large ground floor shop and an “endless” training pool and has its own cycling club, GS Henley, with around 160 members.

The first floor is home to its sister company, Henley Practice, where 30-year-old Mr Plant is the clinical director.

This has a fully-equipped gym, yoga and pilates studio, four treatment rooms and a team of self-employed chiropractors, physiotherapists, massage therapists, strength and conditioning coaches, swim coaches and running coaches.

Mr Griffiths said that when he rowed he began helping cyclists with their bikes and as a result became known for his expertise.

He recalled: “At Leander all the rowers ride a bike but a lot of them don’t know everything about them. I’ve always ridden bikes and know how to look after them. At one point it got to the point where my house was full of bikes! The majority of people who come to Athlete Service aren’t athletes, they are just beginners.

“It’s called Athlete Service, which sounds almost daunting, but lots of people don’t consider themselves to be an athlete. They just want to do some exercise and find out how to begin.

“The business is about offering honest advice and imparting our experience.”

When the pair moved to the Oast House they suddenly had 6,000 sq ft to work with but quickly found there was more demand.

Mr Plant, who lives in Ancastle Green, said: “The number of people just coming in each day and saying ‘what do you do?’ and me saying ‘we do everything’.

“You can only build a business at a certain speed. You listen to what people want and you respond.

“The beautiful thing is that word has spread.”

The men have been able to recruit experts and specialists in their fields that complement the business in order to offer a wider service.

Mr Plant said: “We have got a shop but people come in here asking about training plans and coaching. It’s like a jigsaw and has expanded to encompass more
services.

“We all work with the same ethos of helping the athletes. Henley Practice is a comprehensive treatment clinic which offers everything for your body while downstairs you have got all your kit.”

Mr Griffiths added: “Everyone says ‘when are you going to open another shop?’ but I’ve got enough to do in this shop.

“We want to focus on doing certain things better rather than doing everything. The bike fitting has become really popular.”

One person to benefit from Athlete Service is Sophie Whitworth, a triathlete and Ironman competitor.

She credits Mr Griffiths and Mr Plant with helping her to rediscover her form after an injury and now helps people with their swimming technique with Swim to Live, Sophie Whitworth Coaching, which is based at the Oast House.

She got to know Mr Griffiths through his bike servicing and her former coach, Filipe Salbany, had worked with him.

At that point in her career, the 47-year-old was the world age group silver medallist in the standard distance triathlon but wanted a gold medal.

She achieved this in Budapest in 2010 and in the same year also won gold in the half distance Ironman 70.3 world championships in Florida in the 40 to 44 age group.

In 2011 she finished ninth in a full distance Ironman world championship in Kona, Hawaii.

However, soon afterwards, she was injured as a result of excessive training and was suffering from “under-performance syndrome”.

Mrs Whitworth, of St Andrew’s Road, Henley, said: “It felt like all my muscles were going to tear. I couldn’t run more than five metres without pain.

“For me, 2012 was a total write-off. I was in quite a bad state so I had to go through the whole rehabilitation process.

“For any athlete having to take time away from racing is probably the hardest decision they make.”

In early 2013 she began visiting Athlete Service as she aimed to regain her fitness and form.

She said: “It’s about being managed by the right people. It was the support, having a regular relationship and coming every week for treatment.

“I was having chiropractic treatment and setting the parameters for training.”

In 2014 she was competing again and since then has won Ironman events inSwitzerland and Lanzarote in her age group.

She said: “That’s was the most satisfying day — to know I’d come full circle.

“My desire is to go back when I’m 50 with all this knowledge and to be in the top 10 at least, if not better.”

A year ago, she left her job as a commercial manager at Mondelez UK (Cadbury/Kraft) and joined Athlete Service.

Mrs Whitworth said: “I could see an opportunity for helping people with planning their training and achieving their goals.

“This could be basic fitness goals, racing or how to plan their time wisely.

“I’m helping people learn to swim from scratch, helping children get their technique right and adults who want to get into shape.

“There’s a really good social side here. There are lots of friendship groups that have formed from this and off-shoots — we have a swimming group, for example.

“Because we’re based on the river there’s a whole range of events. A lot of my work is building training schedules for individuals and giving them the encouragement to achieve things they didn’t believe were possible.

“Come to us with any event or race and we’ll be able to find the right programme or piece of kit for you.”