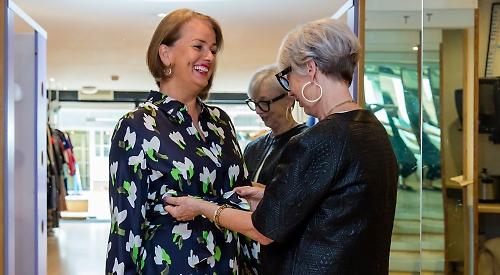 SHOPPERS are being urged to support Henley’s independent retailers.

Fashion consultant Maggie McMillan says these shops give the town centre its identity and need more custom if they are to thrive.

In an echo of the Henley Standard’s Think Local campaign of 2014 she says empty units concern her but residents can help by buying from the independents, which offer good service and an “experience”.

Mrs McMillan, from Remenham Hill, has lived in the Henley area on and off since 1999. She returned permanently in 2015 after a period in London and was shocked at the number of independent traders which had closed since she left.

She said: “I became very concerned at the state of the town centre when I came back.

“There were a lot of empty units and a general sense of decline following the loss of some popular and established shops.

“It seemed to me that people were looking elsewhere and not using their shops in the way they used to.”

Mrs McMillan, who runs a consultancy called The Style Counsel, which advises people how to dress for the workplace, began running fashion and personal styling workshops at clothes and shoe shops.

Now she is also head of dressing for the Thames Valley branch of the Smart Works charity, which offers advice to women trying to get back into work on how to dress and prepare for job interviews.

She said: “I started running the workshops as a way of bringing people back and creating more interest.

“Independent businesses always support Smart Works when we need a raffle prize so I feel it’s my mission to help them however I can.

“Sometimes it takes a while for Henley people to embrace a new shop but I want to see them do well because we’re so lucky to have that diversity.” Mrs McMillan says there has been a “wind of change” with the arrival of new traders such as the VH & Co Boutique in Bell Street, Stocks gifts and clothing and clothes stores East and Busby & Fox in Bell Street and the Cecilia Quinn shoe shop in Hart Street.

She says these complement the long-standing independents and, although her personal interest is in fashion, she says all small traders contribute to the town’s identity and should be encouraged to do well.

“Exciting things aren’t only happening in fashion either — there’s also the Hart Street Tavern and the Shellfish Cow restaurant that’s about to open in Reading Road.

“We’re also lucky to have some very well-established independents like Fluidity in Bell Street and
Gabriel Machin and Facy in Market Place, which shows that you can do well if you’re delivering what people want.

“Small businesses offer a unique range of goods and complement one another rather than being in competition.

“I think customers are moving away from online shopping because they want an experience. They value going somewhere where the staff know their name, there’s no pressure to buy, they can have a drink or a cup of tea and don’t have to faff about with posting their purchases back.

“We’ve reached the point where there’s something for everyone but we need to build on that and make sure it lasts.

“I’d encourage everyone to use these shops more often because they contribute to Henley’s prosperity and vitality. You’re assured of a warm welcome — and if you like what you see, be sure to tell your friends.”

Mrs McMillan, a mother-of-two, regularly takes photographs of clothes and shoes that have caught her eye in fashion shops and shared them on her Instagram page.

She says this encourages her followers to visit the businesses where she bought them so others should do the same or share their recommendations by word of mouth.

Her next workshop will be at the Cecilia Quinn in Hart Street on Thursday (November 14) from 3pm to 7pm.

Henley town and community manager Helen Barnett said: “I’m delighted that someone else is trying to help the community’s independent retailers.

“The town council runs campaigns throughout the year to support businesses, such as the Christmas and rRegatta window display competitions and it’s great that Maggie shares our aims. We all need to support our traders, especially in the run-up to Christmas. It would be nice to think that people would do all their shopping in Henley as we’re lucky to have a diverse offering.

“South Oxfordshire District Council offers free car parking on the three Thursdays before Christmas so we’re doing all we can to encourage people.

“I understand that several empty units are now under offer and being fitted out, which is encouraging. Although retailers face challenges like increasing rents, Henley is still bucking the national trend.

“I agree that the customer’s experience is important. It feels special to visit a lovely market town — the other day I heard a tourist saying it was much nicer than their own high street.

“The face of shopping is changing and retailers have to step up to differentiate themselves. They can get to know their customer base and offer a more personalised service, which Henley’s businesses already do.”

Last month, Ms Barnett warned that shops were struggling to stay open because of increasing rents.

She was speaking as D J King in Bell Street, Henley’s oldest independent jeweller, announced it will close on November 30 because it cannot afford a proposed 50 per cent rent increase.

Other recent closures include the Mezo restaurant in Market Place, Sharps furniture in Bell Street, Galaxy Nails in Duke Street and the Phase Eight boutique in Hart Street.

Recent openings include Harrods’ H Café and the Informality art gallery in Market Place and Mountain Warehouse in Bell Street while a fine dining restaurant called Crockers Henley is to open at the former Loch Fyne seafood restaurant, also in Market Place.