Friends create sci-fi comedy film with set made in garage 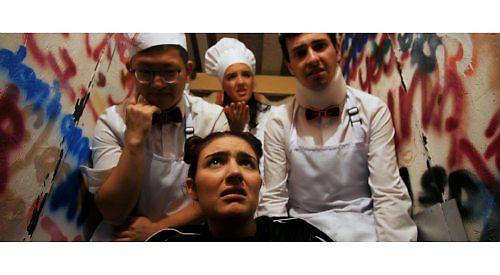 TWO friends have created their first feature film which they hope to show on the big screen later this year.

Director Hudson Hughes, from Binfield Heath, and producer Benedict Evans, from Henley, shot sci-fi comedy Wednesday in Space on a budget of just £1,500 in less than a week in a set they built in Mr Hughes’ garage.

The 90-minute film is set in a galaxy full of sudden violence and aggressive advertising and was borne from a love of the visual effects of classic science fiction as well as the frantic energy of Seventies comedy films.

When a shadowy stranger is murdered in Mr Yim’s Soup House, a diner in the solar system, traffic cop Lucha Flax decides to play detective.

The 22-year-olds came up with the idea shortly after graduating from the University of Southampton last summer.

Using websites like Freecycle and chipboard donated by Construct Scenery they spent about a month building the set.

They assembled a cast and crew of 20, some of whom had to leave the set for a day to attend their graduation ceremonies, with actors, comedians, artists, film makers and musicians giving their time for free.

Mr Evans, who lives in St Mark’s Road and studied English and history, said: “We happened to go to university by chance together and that’s when we started making comedy shorts together.

“It was maybe a month before uni fully ended that Hudson had this idea of making a sci-fi comedy.

“He pitched it to me and it seemed impossible to get done so I was in! Hudson and I had actually lived together in our last year in university and he would talk about stuff like this quite a lot. I knew just by talking to him everyday I could probably help quite a lot in terms of what he wanted from the film.

“We built a three-room set in Hudson’s garage at his home. It really was a ridiculously small garage for what we were doing.”

Mr Hughes, who lives in Kiln Lane, said: “It was fun, but quite intense. There some late nights and a lot of splinters.

“When everyone arrived on the first day of shooting we dedicated half a day to actually finishing off the set. Instead of two people, we had 20. Everyone had to chip in and that was the philosophy of the shoot.

“I chose actors I’d worked with before, either on stage productions or on short films, and people I knew I could trust and wouldn’t complain.

“Everyone who acted did something else. They would end up at the microphone at some point or helping to cook dinner, so it was a team effort.”

Mr Evans added: “Being a small film I had parts in it and three of the four characters I play end up getting shot. I would say I’m not a good actor so I’m very glad I only had minor roles.

“It was all very much on the goodwill of mates or friends and community and theatre groups.

“I loved it and everybody got along really well. There weren’t any major egos involved. In between takes when we would have group meals there laughs all around.

“I ended up being on set until 4am one night and then got three hours sleep and headed off to my graduation. One of the actresses, Natalia May, she graduated but was also working at Wimbledon so came in on Tuesday and Wednesday.”

After shooting visual effects were added by Mr Hughes, who studied electromechanical
engineering, using detailed miniatures and compositing techniques. Several scenes in the film are either TV adverts or set outside the floating restaurant, so were all shot against a green screen.

He explained: “I went about building models a bit like they did for the Star Wars films. I built models of the spaceships and shot those against a green screen and the actual editing was probably about two months of intense work.”

Mr Hughes first screened the film at a cinema on the university’s campus before further editing.

In total, more than 500 hours were spent on the process and the men are currently in talks with several independent cinemas to bring Wednesday in Space to the big screen in November.

Mr Evans said they wanted to show the film in London first, when venues reopen following the coronavirus pandemic. Based on the success of that premiere and surrounding screenings they hope to take their film further a field.

They are also keen to screen it in Nottingham and at the Regal Picturehouse in Henley as well as internationally in America and Canada.

They are set to launch a crowdfunding campaign on Kickstarter on August 1 with the aim of raising £6,500 for marketing and publicity costs.

Mr Evans said: “In the future, if that goes well, it’s talking with distributors and video on demand costs. It’s actually really hard to do sci-fi on a budget. Comedy on a budget is an easy one — you could just make jokes at a camera for an hour and a half.

“It came about quite organically because a lot of the films myself and Hudson and our housemates would watch would be slightly weird and slightly low budget.

“It’s such a mish mash of styles. It's comedy but then we have got these crazy, super aggressive, American style telemarketing adverts.”

Mr Hughes said he was delighted to complete his first feature film.

“It’s very rare that you get to have a project where you say ‘I really put my all into this, I put 100 per cent into this’ and this is one of the few projects I can say that,” he said.

“I always considered myself a film maker but was never sure whether I wanted to do the writing, directing and editing, but it really solidified the idea that I wanted to direct.”

Their film has already won several awards including official selection at this year’s Canadian International Comedy Film Festival as well as three silver awards for its concept, title and credit sequence and in the narrative feature category at the International Independent Film Awards.

The men started making stop motion films when they were younger and have been creating short films and sketches in recent years.

While at university Mr Hughes created several short comedy films, including December Heat, that won awards within the university as well as at a national level.

The men are planning to make a couple more short films this year and also intend to shoot a proof of concept for another feature film.

Mr Hughes does his own comedy sketches every week on YouTube.

For more information on the film and Kickstarter campaign, visit www.wednesdayinspace.com