Siblings are number one 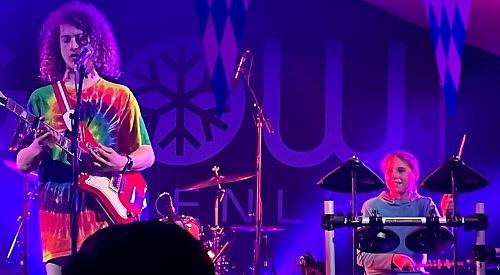 A BROTHER and sister won the Glow Festival Battle of the Bands competition at Leander Club in Henley.

Guitarist Felix, 14, and drummer Didi, 12, who both attend Gillotts School, played Seven Nation Army by the White Stripes, Sunday Driver by the Raconteurs and Last Christmas by Wham! during the festival’s family fun day.

The pair have performed in public several times before, including at the Henley’s Got Talent competition in 2018, the Henley Heroes Awards, the Henley Youth Festival and the Henley Living Advent Calendar.

The prize was a day of artist development at Henwood Studios in Wallingford with Jayson Jaurigue (“JJ”), founder of Eight Ray Music in Henley.

The children’s father Matt, of Deanfield Avenue, Henley, said: “It was great to see them play to an audience after such a long time. During the pandemic there have been so few chances for young people to develop presenting and performing skills.

“I’m very grateful to JJ. The Glow Festival was incredibly well organised and a great experience for them.”

The pair are pictured with runners-up Idle Thoughts, a four-piece band from Shiplake College