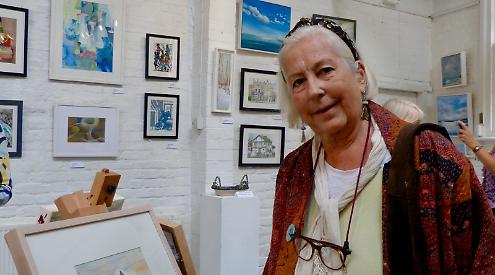 A WOMAN from Henley won a prize for her artwork.

Belinda Fitzwilliams won the Marie Dyson award at the Reading Guild of Artists’ annual exhibition at the Old Fire Station Gallery in Henley, for her two watercolours.

Mrs Fitzwilliams, 79, who lives in Adwell Square, has been an art teacher throughout her adult life and said: “It’s absolutely wonderful. I’ve wanted it for a lifetime. I’ve been entering for 30 years and I’m just thrilled to finally get it.”

“I unfortunately have problems with my eyesight now and it means I can’t dedicate as much of myself to art and teaching anymore so it’s just lovely to get this award.” Clive Duncan, a Shiplake sculptor and former president of the guild, which was founded in 1930, chose the winners and said there was a large variety of talent to choose from.

Mrs Fitzwilliams was given first place for two of her watercolour paintings called “I Love My Cello”, painted with gouache paint of a slightly abstract brown and white cello, and “Nude at Dusk”, where acrylic paint was also used to outline the body.

Mr Duncan, who judged them, said: “Belinda has captured the essence of her subjects. These are understated but visually strong images.” Mrs Fitzwilliams was presented with the award last Friday at the launch of the Art Works exhibition, the guild’s 91st in Henley, which is designed to show the many benefits of art.

The exhibition features about 150 paintings, drawings, original prints, sculpture, ceramics and three-dimensional artworks. It will run at the Upper Market Place venue until Tuesday.

Marie Dyson, who had the award for two-dimensional art named after her, contributed to an expansion of activities at the organisation in the early Sixties.

This year, the guild also introduced an award for three-dimensional pieces called the Pauline Mercier award.