Students gear up for qualifying races 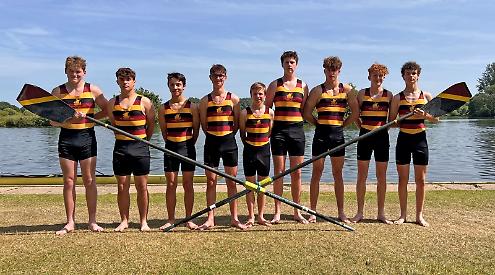 SHIPLAKE College, Reading Blue Coat School and the Oratory School have entered nine crews between them at this year’s Henley Royal Regatta with six of the boats competing in today’s (Friday) qualifying races.

Shiplake College have six entries in five events as they aim to add more silverware to their trophy cabinet after winning the Diamond Jubilee Challenge Cup last year. Mia Vickerman, Scarlet Maleham, Jess Weir and Merry Oakes will be the girls’ quad aiming to defend their crown in junior women’s quad event.

In the newly-named Prince Philip Challenge Trophy for girls eight, Shiplake, who will be racing the qualifiers, will be represented by Megan Hadfield, Hannah Boddy, Gesa Hallmann, Georgia Catlin, Casey Green, Maya Jackson, Phoebe Young, Ellie Webb and cox Monty Walker. This crew is made up from the B quad, coxed Four and double.

In the Princess Elizabeth Challenge Cup for boys’ eights, Shiplake will be represented by the same crew that finished fourth at this year’s National Schools’ Regatta. The crew will be made up of Ed Tayler, Dillan Hillier, Jake Birch, Freddie Middleton, Ed Dallas, Fred Fox, Seric Critchley, Matthew Johnston and cox Wallace Fisher.

The Temple Challenge Cup for student men’s eights will see Shiplake College have two entries, both of which will be in the qualifiers today. The A crew is made up of Nick Summerfield, Tom Madden, Rocco Pritchard, Luke Byca, Ned Floyd, Tom Houghton, Toby Rackett, Felix Arkle and cox Charlie Keena and the B crew consisting Henry Brough, Oliver Smee, Tom Lebeau, Gus Elliott, Sylvan Verzone, Matthew Provoost, Ben Brooks, Ed Houghton and cox Oli Joiner. Ed Humphris, Fin Worthington, Harrison Harper and Leo Creighton will be in the qualifiers for Shiplake in the junior men’s quad event, the Fawley Challenge Cup.

Reading Blue Coat School have two crews entered with the boys’ first eight competing in the Princess Elizabeth Challenge Cup whilst the girls’ quad, who are required to qualify, are entering the regatta for the first time in the Diamond Jubilee Challenge Cup.

The girls squad have been racing in small boats throughout the regatta season but will now race together in the quad.

The boys eight have had a good season to date, winning the Schools’ head of the river for the first time in the school’s history.

Both Blue Coat’s boys and girls squads produced a god set of results at the recent National Schools’ Regatta.

The Oratory School have just one crew entered this year in the Fawley Challenge Cup. Coached by former Leander cox Sam Royston, the crew that required to qualify, is made up of Joe Gosling, Max Brothers, W Harper and Tom Martin. Martin is the only member of the crew who has raced in the regatta before, having competed when he was 15 in 2019.