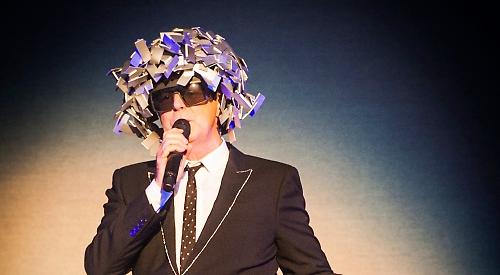 THE Pet Shops Boys had the whole crowd dancing as they performed a string of hits on the second night of this year’s Henley Festival.

They were revealed to the packed lawn and grandstand as two large white discs on the “floating” stage rotated to reveal the synthpop duo behind.

Neil Tennant and Chris Lowe, wearing futuristic metallic helmets and sunglasses, then launched into a 90-minute set, dazzling the crowd with a light and laser show last night (Thursday).

It included The Pop Kids, Go West, It’s a Sin, and finished with an encore of Domino Dancing and Always on My Mind, which had the whole crowd singing along.

Dressed in shiny black trousers, a black jacket, polka dot tie and white shirt, Tennant told the crowd: “Good evening Henley, we are the Pet Shop Boys. It’s great to be here in front of this gorgeous audience.

“For once I don’t feel overdressed! Tonight, I know you’re in your tuxedos and gowns, but we’re going to have some fun, we’re going to dance, you’re going to be blinded by lasers because, tonight, you’re all pop kids.”

After the show most people stayed to watch a pyrotechnics show and enjoy the atmosphere.

Other entertainment on the night included comedians Paul Zenon and Glenn Moore, performing in the Salon Comedy Club, and music from Vonda Shepard and Ronnie Scott’s Allstars.

For a full festival round-up, see next week’s Henley Standard.