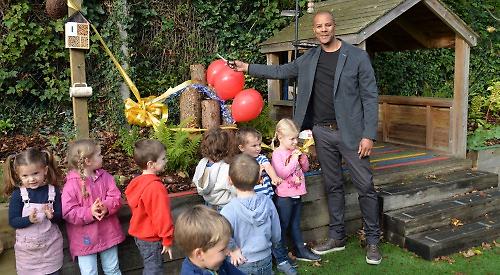 The Rellik star cut the ribbon of the garden at Trinity Pre-School on Friday following an £18,000 renovation over the summer.

The new garden features designated areas where children can dig in the soil and plant their own vegetables, which they will then cultivate and eat at snack times.

There is also a nature area and small wooden hut for viewing wildlife as well as a “mud kitchen” complete with pots and pans.

The pre-school is in the grounds of Trinity Primary School in Vicarage Road and the garden was built by Netley Landscapes, of Emmer Green, in a week during the summer holidays.

Jean Oliver, chairwoman of the pre-school committee, said: “It’s absolutely fantastic, we are so pleased with it.

“It took a lot of resources but it’s done now and will really encourage the children to dig, get in the mud and grow their own veggies.”

Wildman, who has also appeared in the Harry Potter films and Extras, lives in Henley with his actress partner Ceri Ann Gregory and their son Lucas, three, who goes to the pre-school. He said: “We’ve only been in Henley for two years but the pre-school has been incredible and I didn’t realise it was a charity.

“The amount of work that goes on in this space is pretty incredible and it’s a privilege to have.

“Lucas has benefited from it — he’s starting to grow in the garden, he’s eating tomatoes and telling us all about plants. He wants to help cook now and is smelling all the herbs, which is great.”

Meanwhile, the pre-school is looking for volunteers to join the committee, which will be elected at the annual meeting on Monday, October 30 at 7.30pm. Committee member Gemma Grange said: “All the children of the current committee have moved on now so we are looking for new members. The pre-school is a charity and cannot run without a committee.

“People who don’t have children at the pre-school can now sit on the committee so if you want to keep this wonderful resource please contact us.”

Ms Oliver added: “The committee could really benefit from a retired person, who would get such a lot out of it.”