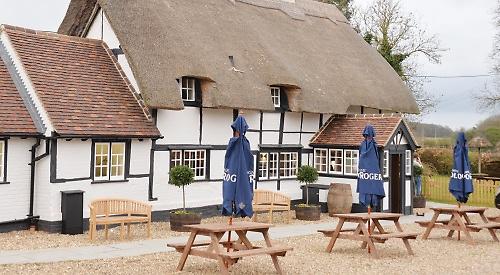 A PUB has been honoured in the Michelin Guide 2018 just months after re-opening.

The Bottle and Glass Inn in Binfield Heath is not only listed but has also been awarded L’Assiette Michelin, or the Michelin Plate.

The title, which was introduced last year, is for establishments which have almost reached the standards required for a Michelin star.

The pub opened in April having been shut since November 2013 before being bought by the Phillimore Estate. It is run by David Holliday and Alex Sergeant.

A Michelin inspector visited about a month after the pub started trading again.

The guide says: “This pretty thatched pub sits in a lovely, rural spot. The original part is the most characterful, while the restaurant is more up-to-date.

“Modern British cooking is refined but unfussy and has an appealing simplicity.”

The former Brakspear pub had struggled under a rapid succession of landlords before its closure.

Lord Phillimore added a two-storey extension which houses a 70-cover restaurant while the original Grade II listed building has a traditional bar area.

Mr Holliday, from Wargrave, and Mr Sergeant, 31, from Pinkneys Green, spent £250,000 furnishing and fitting out the interior.

The pub now serves beer from the Loddon Brewery in Dunsden, which is also on the Phillimore Estate, while its menu includes Oxfordshire wood pigeon, estate fallow deer chop and cheeses from the Nettlebed Creamery. It bakes its own bread for every service and churns its own butter every day.

Mr Holliday said: “The Michelin inspector wasn’t giving anything away but he said they always visit places they’re interested in soon after they open, which was promising.

“The fact that we’re not just in the guide but have won the plate shows that we’re on the right track and we plan to keep on doing what we’ve done so well.

“Hopefully it’s a precursor to even greater things.

“We’re very proud of what we’ve accomplished and to get this after just 24 weeks is great.

“I think we’ve ticked all the right boxes for our customers and we’d like to thank them for their support. We’re also incredibly thankful to our team for working hard.”

Also included in this year’s guide are long-standing entries for the Three Tuns and Shaun Dickens at The Boathouse, both in Henley, Luscombe’s at The Golden Ball in Lower Assendon, the Dog and Badger at Medmenham, the Five Horseshoes at Maidensgrove, Orwells at Shiplake Row, the French Horn at Sonning and the Miller of Mansfield in Goring. All won Michelin Plates.

Another winner was the London Street Brasserie in Reading, which is run by chef Paul Clerehugh, the Henley Standard food columnist who also runs the Crooked Billet in Stoke Row.

Orwells has also been named one of the top 50 restaurants in the country and awarded four AA rosettes, both for the second year running. It was placed 31st in this year’s Good Food Guide’s Top 40, 13 places higher than last year.