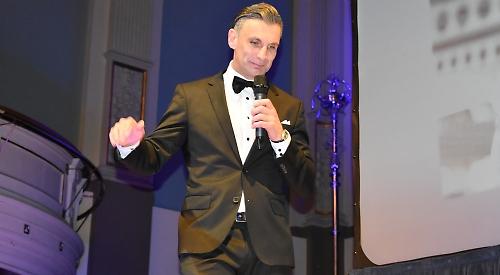 AFTER all the recent publicity surrounding women’s equality, you’d expect the compere of the Sue Ryder Women of Achievement Awards to know better than to crack a sexist joke.

But the old adage about knowing your audience must have slipped the mind of BBC Radio Berkshire sports presenter Ady Williams at Reading town hall on Friday evening.

The former Reading FC and Wales footballer was booed on stage after telling a joke which poked fun at women’s driving skills.

He was heckled by several members of the audience and was called out by several of the award winners.

Tara Windsor, who collected the courage award, broke off midway through her acceptance speech to tell Williams: “We can park by the way.”

Suzanne Stickley, who won the services award, told the presenter how handsome he was looking before adding: “Maybe next time we could have a woman compère, seeing as it’s the Women of Achievement!” Williams later apologised to the audience and after the ceremony admitted: “I’m still shaking about that joke now. I wish I’d never told it.”

Earlier, he was involved in a bizarre game of heads or tails with Olympic rowing silver medallist Vicky Thornley, a nominee.

The new Leander Club captain went up on stage to toss a coin and members of the audience had to guess which side it would land on by putting their hands on either their heads or their “tails”.

Anyone who guessed incorrectly was eliminated until there was just one person left, who won £100.

Incredibly, Thornley tossed the coin 11 times and each time it landed on tails.

After ribbing her about her ability to toss the coin, Williams then took over and promptly produced a “head” first go.

At this, he joked that it took a man to do the job properly.