Heroes save cygnet after attack by two adult swans 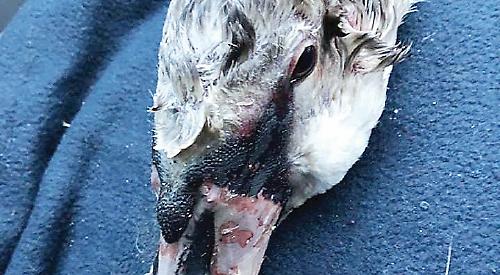 TWO members of the public helped save a cygnet’s life in Henley.

The men assisted a Swan Support volunteer after they spotted two adult swans attacking and trying to drown the young male near the bridge by Marsh Lock.

The men, who had been in town doing their Christmas shopping on Christmas Eve, called the charity.

Volunteer and trustee Joanne De Nobriga, from Caversham, was alerted and drove to the Mill Lane car park and then walked to the river.

She said: “I could see one of the swans behaving in a way that told me it was trying to drown the cygnet. I rushed over and made my way down by which time the adults had swum away.”

The cygnet had taken refuge near a culvert so she lay down on the walkway in an effort to get closer.

She tried to catch it using a pole with a hook attached but the bird was just out of reach and it was hard for her to see because of overgrown ivy.

Then the men came to her aid and while one held her legs so she could get closer to the bird and retrieve it, the other acted as a spotter, guiding her to its location.

Mrs De Nobriga said: “There were these two lovely guys who were on the weir bridge. They were shouting directions to me because they could see it and I couldn’t see through the ivy. It was really challenging because the hook kept getting caught in the ivy.

“Because I was lying down I was moving further out and more of my body was over the water.

“One of the men came over and said, ‘can I help?’ I said ‘if you could hold me down I can shift over and have more of my body over the water which means I can reach further’. His friend was still on the bridge giving directions.

“I needed to have probably a third of my torso over the water in order to be able to reach the cygnet.

“I eventually managed to locate it and then hook it out, take hold of its neck and secure it before transferring it to Swan Support. Both of them made it much easier and safer for me because I was a bit concerned about falling into the river.

“I was really relieved and so pleased because it meant I could be a little bit more daring, knowing he was going to be holding on to me.”

Several members of the public who watched the drama applauded when the cygnet was saved.

Wendy Hermon, operations director of Swan Support, said: “We had a couple of calls saying there was a swan being attacked by another pair, which is quite normal. At this time of year the adults are getting territorial, ready for the next breeding season. Anything that comes into their territory they will chase off and, if they can’t or it doesn’t go, they can trap it in an area where it doesn’t stand much of a chance.

“To be honest, if it wasn’t for these guys that cygnet would have died. They were just in time.

“The public are amazing and many swans, cygnets and other wildlife wouldn’t make it without them. It’s not just about us as rescuers — without the public. we wouldn’t get the calls and the birds would die.”

Mrs Hermon said she expected the cygnet to make a full recovery at the charity’s base in Datchet and it was due to be released this week.

Diana Gittings, who witnessed the rescue, said: “This rescue was carried out while the Thames was swollen and in full flow and I thought it very brave of both rescuers because they could have easily slipped into the river and been swept away.”