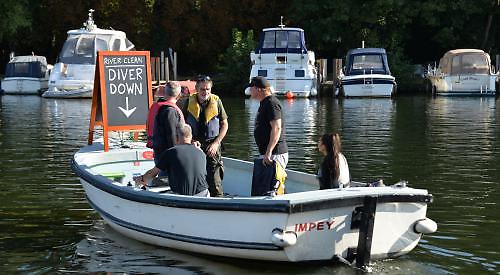 A SCUBA instructor from Henley has begun sweeping the bed of the River Thames for rubbish.

Tony Rudelhoff undertook the first of several dives on Saturday on the stretch of water between Hambleden Lock and Marsh Lock during which he filled three large bags with waste.

His finds included dozens of wine and champagne bottles, which he believes were thrown from the towpath or over the sides of boats during the Henley Festival and Rewind Festival.

He also retrieved a frisbee, a mobile phone, a small, gas-powered barbecue and an empty gas cylinder.

He will dry out the phone, which is fairly new, and attempt to reunite it with its owner if he can get it working again.

Mr Rudelhoff, 59, of The Close, Henley, worked for about four hours from a boat provided free of charge by Hobbs of Henley.

He and his crew were given a free lunch afterwards at the Angel on the Bridge pub in Thames Side. He was accompanied by fellow diver Andrew Girling, also from Henley, who had read about his plans in the Henley Standard and wanted to join in.

Mr Girling dived for an hour near Phyllis Court Club off Marlow Road and retrieved several items, including old mooring signs. Also on board were Deputy Mayor David Eggleton, who was paying the cost of their compressed air cylinders, and Mr Rudelhoff’s niece Bianca Pietosi, who took water samples from the river as part of an environmental project.

The boat was equipped with a sign telling other river users to stay clear and the crew carried a loudspeaker to warn anyone who didn’t notice.

Mr Rudelhoff was conducting a “check dive” so only picked up the most visible rubbish but he made a note of where the largest deposits were and will return to collect them.

He will be diving again near Marsh Lock tomorrow and hopes to find a sponsor for the project as he has already spent about £800 of his own money on it.

Henley Town Council has pledged £340 which will cover another four days’ worth of compressed air.

Mr Rudelhoff said: “It was surprising that there weren't many plastic bags or bottles, although we only covered a relatively small area and might find more later on. There were lots of other things like metal objects.

“The water was surprisingly clear. I was able to see up to 10ft in front of me, which isn’t always guaranteed. In some rivers you can’t even see your hands in front of your face.

“I’m looking forward to the next dives, although it will be trickier at Marsh Lock. I’ll have the water coming towards me so I’ll need to be a bit more cautious.

“When we were unloading the rubbish, a lot of people wanted to know what we were doing and one woman said she was glad that somebody was finally taking action.”