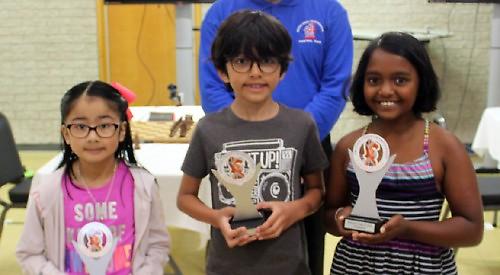 A BOY from Henley who taught himself to play chess only a year ago will bid to win his second major competition tomorrow (Saturday).

Theo Khoury, nine, will be taking part in the national final of the Delancey UK Schools Chess Challenge in Daventry.

It comes only two months after he won the under-nines age group at the British Chess Championships.

Theo, a pupil at Valley Road Primary School, was introduced to the game by his parents Wadih and Jessamine when he was four but he showed little enthusiasm for it.

He would sometimes play a simple version with his brother Alexandre, 11, but did not take it seriously.

He only became properly interested during the summer holidays last year when he started watching tutorial videos on YouTube. He then read some old books about chess belonging to a relative with whom the family were staying.

When they returned home, his parents bought him a more up-to-date volume aimed at younger readers and Theo quickly improved.

In November, he joined Maidenhead Chess Club and his parents hired teacher Dino Sujoldzic, from Caversham, to help him improve his tactics.

Theo began competing in chess tournaments and won two as well as qualifying to compete at the London Chess Classic at Olympia.

He then won at the British championships in Torquay, which means he will represent his country at an international event next year.

He reached the schools challenge final, or “terafinal”, after coming joint first in his age group at the regional final in Manchester in July.

Tomorrow’s competition, in which 77 children aged six to 18 will be taking part, will follow a “rapid play” format in which each player has less than 60 minutes to make all their moves.

The Khourys said Theo has followed his passion with no prompting from them and they are proud of his accomplishments tpo date.

Mr Khoury, who drives his son to tournaments, said: “Theo has done very well so far, although the terafinal is going to be much harder as there will be a mix of older age groups.

“I’m just so happy that he has found something. I know the rule of chess but I don’t play myself and all the enthusiasm comes from him.

“He’s self-taught and self-motivated and I just helped introduce some structure through bringing in a teacher.

Mrs Khoury said: “My husband and I know the basic moves so we tried different games with the children when they were very young and chess happened to be one of them.

“Theo liked it and the boys would play it in their own way but he didn’t absolutely love it like he does now.

“I think he read those chess books when we visited our family simply because he was bored but that’s when he became extremely interested. They were older books and aimed at adults but they caught his attention.

“We then got him a decent book on all the right methods which wasn’t too advanced but wasn’t for complete beginners either and he really liked that.

“Theo is very much the one who pulled us towards chess and not the other way around. He wants to play it whenever he can and will take every opportunity to practise.

“It’s an obsession — I’ll ask him to do his homework and he’ll try to play chess instead.

“It makes sense as Theo absolutely adores maths — before reading chess books, it was maths books. He’s good at spotting patterns in things and has an amazing memory. He’ll recall a move that someone played against him months ago.

“We’re just making sure he keeps up with his schoolwork as he’s still a normal boy.

“He jokes that he wants to be the world champion but, most importantly, he genuinely enjoys playing and competing. Even when he loses, most of the time he’s still very happy because he knows he’s learning from his mistakes.

“I think his friends are surprised but we don’t talk about it too much as he’s just like any other child who might enjoy drawing, football or painting — they’ve all got their own things.

“He has been able to show and talk about his chess trophy in school assembly but that’s about all.

“We’ve given him the freedom to follow his passion and we’ll encourage him and make certain things easier for as long as he is interested.”

Theo said: “I really enjoy playing because it’s fun to learn new things. It’s nice to get good at something and when I play I can now think about five moves ahead.”

Tim Coulson, headteacher of Valley Road school, said: “We’re extremely proud of Theo as it’s an incredible achievement at such a young age.

“Chess suits his natural abilities and that’s what we want to support — it’s isn’t just about athletic or academic talent.

“There were gasps of approval when he showed his trophy at assembly and hopefully others will be inspired to play, although they’ll have a long way to go before they catch up with him.”