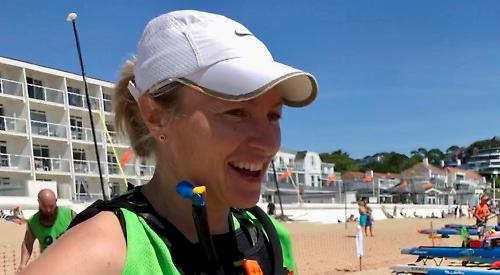 A WOMAN from Wargrave has made her mark on the sport of paddleboarding.

Alexandra Tyrer was the first Briton to finish in the annual GlaGla Race in France and the eighth fastest woman overall.

Now she hopes to take part in more competitions and improve her ranking.

Miss Tyrer, 41, was among more than 600 competitors in last month’s race at Talloires on Lake Annecy in the Auvergne-Rhône-Alpes region of south-eastern France.

They all had to paddle 14.5km while standing on their paddleboard in freezing conditions.

Miss Tyrer, a paddleboarding instructor at Bray Lake, said: “This was my first international race and I was very surprised to do as well as I did, especially as there were professional paddlers there and some of them had world titles.

“It was also my first overseas event, so it took a little more planning but that was the perfect excuse to make a mini-holiday out of it.”

When she arrived on the morning of the race, she found a layer of ice on her board bag but the water on the lake was calm.

She said: “I kept my cool and stuck to my race plan, which was to get around the first marker buoy at 1.5km intact and avoiding a dip. Many people took the plunge, including the pros.

“For the 5km stretch up the western side of the lake, I found my rhythm and started to move up the field, picking up a few other paddlers in a chain gang behind me.

“I held my line and paddled strong before turning right and hugging the east coast for the final 4.5km back to the finish line. My aim here was not to get passed and it worked.

“I finished strong and crossed the finish line in 1 hour 43 minutes and three seconds, placing me 81st overall. It was also rather nice to be the first Brit home. I was beyond chuffed.”

Miss Tyrer, a programme manager, grew up near Manchester and moved to Henley in 2009 after several years of living in Denmark and then moved to Wargrave in 2016. She used to be a keen cyclist and in 2013 rode the route of the Tour de France for charity.

She also rowed at Upper Thames Rowing Club in Henley, which she found was good for strength and conditioning but preferred paddleboarding.

Miss Tyrer said: “Bray Lake is a brilliant place to get into it because they have a very active paddleboard racing community. I have also met some great friends through it. It is an easy sport to learn, although there are certain safety aspects and there are ways to be more efficient.”

Her next big challenge will be to take part in the Stand Up Paddleboarding 11-City tour in the Netherlands in September, which involves paddling 220km in five days.