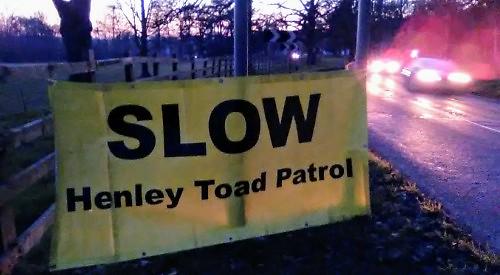 VOLUNTEERS from Henley Toad Patrol have helped more than 2,600 toads to cross the road safely.

The wet and mild conditions from Storm Dennis made for the perfect toad crossing weather and the amphibians “marched en masse” on Saturday evening.

The volunteers collect the creatures in buckets at a temporary barrier they installed along a stretch of the A4155 Marlow Road earlier this month.

It was put in place to prevent the toads from being killed by vehicles as they migrate from Oaken Grove Wood to a pond in the grounds of Henley Business School.

So far this year, 2,665 toads, 60 frogs and 50 smooth newts have been carried across the road to their breeding pond.

Professor John Sumpter, a founding member of the patrol, said: “These are very high numbers for mid-February. In some previous years, when it has been cold in February, not a single amphibian has been collected by this time.

“However, the very good start to this year’s efforts provides no indication of what the final total will be. Only time will tell.

“People were advised not to travel over the weekend as Storm Dennis passed through but the toads decided not to heed that advice. In fact, they did quite the opposite. If there is one thing that toads like it is mild, wet weather.”

On Friday, 13 volunteers carried nearly 500 toads, together with a few frogs and newts, across the road in buckets and released them on the edge of the pond on the Culden Faw Estate where they breed.

The following night was much busier as 14 people carried 1,867 toads, 44 frogs and 41 newts over the road. The last volunteer stayed until 12.30am to help the remaining toads.

The number of toads dropped significantly when the colder weather returned on Sunday. Volunteers collected 119 toads and a few frogs but this was still much higher than a typical February day.

Prof Sumpter, head of ecology at Brunel University, said most of the toads collected so far this year were males.