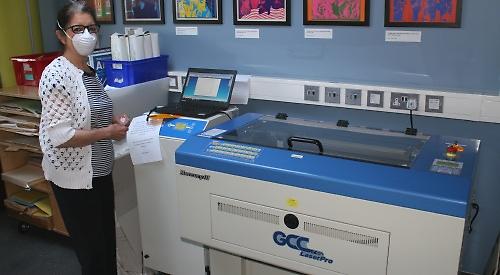 A TEACHER at Reading Blue Coat School in Sonning is making protective visors for NHS and private medical staff who treat coronavirus patients.

Harvey McGough, the head of design technology at the independent school off Sonning Lane, has worked with Leighton Park School in Reading to produce more than 6,000 of the devices for doctors and nurses at the town’s Royal Berkshire Hospital as well as GPs, health visitors and care home workers across Berkshire and Oxfordshire.

Mr McGough was sent the computer-aided designs by Mark Smith, his counterpart at Leighton Park, and builds them using his department’s automatic laser cutter. He is being helped by his wife Ivonne McGough, who also teaches DT, their young son Alex and several colleagues including physics teacher Will Gilbertson and year 7 head Rebecca Crossland.

Those who are qualified to use the cutter have programmed it to make a strap which goes over the wearer’s head. Another group of volunteers take the finished straps off the machine, clean them and send them to Leighton Park, where staff attach a clear protective face sheet and send them where they are needed.

Reading Blue Coat School is part of a larger network of schools and businesses which has so far issued more than 12,000 visors with at least 2,000 more in the pipeline. It was only going to make them during the Easter holidays but has decided to continue when term-time resumes.

Mr McGough said: “It’s been a great team effort, with us producing the headbands and Leighton Park handling finishing and logistics. I wanted to help as soon as possible because we’ve got such great facilities that it would be criminal not to put them to good use.

“There’s a shortage of personal protective equipment across many areas of healthcare and we’re getting so many requests from people who are absolutely desperate. As of last week, we’d had requests from 215 separate premises or individuals.”

The school, which is also helping practitioners in Surrey and Hampshire, is raising money through a crowdfunding campaign which so far has raised almost £20,000.

Mr McGough said: “It’s an impressive amount but we’re absolutely munching through it. The laser cutter is the major pinch point — we could do a lot more if we had another one but we’re still doing pretty well, all things considered.

“There’s an amazing atmosphere among our volunteers and we want to carry on after the holidays because, frankly, people are going to continue dying and we don’t want to stop if we’re making a difference.

“People really want to help. Our volunteers are giving up whole days at a time to make this happen. They’ve all got their own stories and some of them have family in the medical profession or know people who are, so they know what the situation is like on the frontline.”

Headmaster Jesse Elzinga said: “I’m extremely proud of how the school has been able to respond to the crisis. We are incredibly supportive of the NHS and its staff and while we enjoy applauding on Thursdays, it’s good that we can offer something concrete as well.”

Anyone wishing to fund the school’s efforts may donate at https://www.gofundme.com/f/covid19-face-shields-for-frontline-nhs-staff

Meanwhile, a Henley tailors which set out to make 840 sets of surgical scrubs for the Royal Berks has exceeded its target after raising more than double the money it hoped for.

Blazer firm Collier and Robinson, is now set to produce at least 1,000 sets of protective tops and trousers. It also hopes to make several hundred gowns for GPs and staff at the Hart and Bell surgeries in Henley as well as Nettlebed surgery and Sonning Common Health Centre.

Kristie Shemilt, who runs the business with her husband Mark, has been cutting out the designs with the help of staff and volunteers at her workshop off Greys Road. The outlines are then sent to another group of helpers who sew them together at home and batch them up for delivery along with a sterile laundry bag.

The first batch was delivered to the hospital last week and others will follow shortly. All are made from a special material which can be washed at high temperatures and has a sterile coating.

Mrs Shemilt, who launched her appeal for help and donations a fortnight ago, expected to raise £8,500 for about 700 pairs but has so far received more than £17,000.

She said: “It’s been a real success. We’ve been incredibly busy and still have a lot of work ahead of us. We could probably make up to 1,250 sets of scrubs for the hospital but the surgeries in our area need help too.

“People are amazed at how much we’ve achieved in just a few weeks and I’m very thankful to my amazing volunteers. One lady told me she will sit at her machine every day for as long as she’s able.

“Everyone is happy to be able to help and grateful to the NHS staff for everything they do to keep us safe.”

The head of design technology at the Oratory School in Woodcote is to fit a protective plastic shield at the front desk of the Bell Surgery in Henley. Nick Mills was asked to do so after he fitted similar devices at Woodcote and Goring’s joint medical practices two weeks ago.

He was due to carry out the work today (Friday) after surgery staff heard about his previous efforts and approached him for help.

Mr Mills, who has fitted screens at four other surgeries outside the Henley area, is only accepting payment for the cost of the materials. He has also built face visors in his lab for Woodcote and Goring surgeries, Townlands Memorial Hospital in Henley and the Sue Ryder palliative care hub at Nettlebed.

He said: “It’s all kicked off now and I’m getting a lot of enquiries. I’ve ordered the materials for the Bell Surgery but it’s going to be quite an interesting build because the front desk is a zig-zag shape with no walls to attach a frame to.

“However, I’ve come up with something that will attach to the desk. Every build has its own challenges and you have to work with what you’ve got.”

Volunteers at Shiplake College have now produced about 600 face shields by hand after their cutting machine broke down last week.

The visors, which the team cut out with jig saws, have gone to the Royal Berks as well as the Henley Manor and Thamesfield care homes in Henley, Huntercombe Hall in Nuffield, Lashbrook House in Shiplake, the Abbeycrest care home in Sonning Common and St Luke’s assisted living complex in Emmer Green.

The team will continue making up to 100 a day for as long as they are able and future beneficiaries will include funeral director A B Walker, which has branches in Reading Road, Henley, and Gosbrook Road, Caversham.

Matthew Walker, the company’s managing director, has previously told the Henley Standard of the challenges his industry faces in obtaining protective kit.