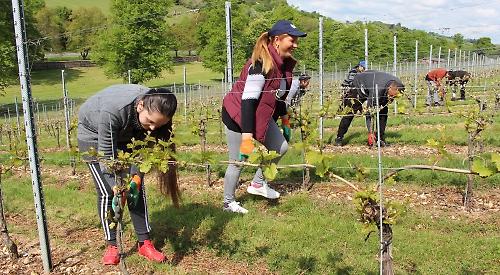 FOOD and wine producers are experiencing mixed fortunes as a result of the coronavirus crisis.

Some say trade has increased while others have seen a downturn in custom.

The Tolhurst Organic farm in Whitchurch, which grows more than 100 different types of vegetables each year, is enjoying an increase in sales at its farm shop, called Lin’s Veg Shed.

Manager Eugena Tolhurst, 43, believes the surge in business is down to customers avoiding supermarkets to avoid the risk of catching covid-19.

She said: “People have been changing shopping habits during lockdown. Sales are well up and we hope this is the start of a new public awareness about locally produced foods.

“We have run out of potatoes but before the lockdown we had excess potatoes, onions and beetroots.

“It was ridiculous at first and we had to close our shop and only open it on set days when I would manage it. It was the only way to share out the produce and manage the shop.

“We had to do that for two weeks because of panic buying. That was the week before lockdown and the week afterwards.

“People wanted things like potatoes, onions, carrots and swede. They really wanted lots of veg because they are thinking about their health and the food is organic.

“We’re about seasonal eating and suddenly people value their health when they’re faced with a huge threat. We feel very valued in the local community at the moment by longstanding customers and new ones. It’s nice that people are thinking about food on their doorstep.”

The farm, which is run by her father Iain Tolhurst and his wife Tamara, is doing so well that it has hired another member of staff.

Ms Tolhurst said: “We’ve actually created another job. We are six full-time members of staff and two interns on a volunteer basis.

“We’re all outdoors and do not need to work too closely with each other. It’s not hard to socially distance on the farm when you’re planting rows of cabbages.”

Despite the positive sales, the farm has found it hard to source seeds to plant new produce.

Ms Tolhurst said: “Everyone went online to buy seeds because the garden centres closed. People have been overbuying vegetable seeds to grow their own because they have nice-sized gardens and we’re all quite rural-based.

“During lockdown we are still propagating and we did manage to source what we needed so we are now able to expand what we’re growing this year.”

Ar Rockwell End House Farm in Hambleden production has not been affected by coronavirus at all. David Emmett, 70, who manages the farm with his son Matt, 39, said they were carrying on as normal.

The farm produces beans and also hopes to produce 400 tonnes of wheat this year. The men also have 120 breeding ewes across their 250 acres.

Mr Emmett said: “It hasn’t affected production at all. Crops have still got to be grown and looked after. We have to protect them against fungus diseases.

“We just have the same domestic problems about social distancing as anyone else. Our man still comes down to advise us on our crops and we socially distance from him.”

The field bean harvest takes place in September and this is likely to be used for animal feed.

The ewes have just given birth to about 200 lambs but they will not be ready for market before next spring.

Mr Emmett said: “This virus is going to affect the whole world. We are a small farm anyway so we already found it a bit difficult.”

Fairmile Vineyard in Henley has seen a fall in the demand for its award-winning sparkling wine. Last year the 7.5-acre site produced 22,000 bottles from the 12,000 vines.

Owners Jan and Anthea Mirkowski hope to produce a similar amount this year depending on the weather but are worried about how much of it they will sell because of coronavirus.

Mr Mirkowski said: “We have seen a downturn in wine sales. Restaurants are not buying wine from us at the moment and people are obviously not having so many family celebrations and get-togethers. There’s not the same need for sparkling wine.”

He has still been able to find labourers to help at the vineyard.

Mr Mirkowski said: “Quite a number of locals have offered their services and some for free while they are in furlough.

“The job we’re doing at the moment is removing shoots from the plant and taking the buds off. It’s called ‘bud rubbing’ and is quite labour intensive.”

The lockdown has prevented the vineyard from running public open days and tours or promoting the wine at the Henley Eat! Food
Festival and Mapledurham Food Festival, which have both been
cancelled.

Mr Mirkowski is confident that he will be able to manage despite the difficulties.

He said: “We’re still selling a bit to private individuals and several customers have said they want a bottle for a friend or relative.

“The good news is our product isn’t perishable. If we don’t sell it this year, we can always sell it next year. It improves with age.

“It will be a difficult year but we’re going to get through and I’m confident. The Government has said that off-licence premises can stay open, which means that we’re still allowed to sell wine.

“We have stopped selling direct from the vineyard but we can offer free delivery of one case or more throughout Henley and we courier wine to people anywhere around the country.”