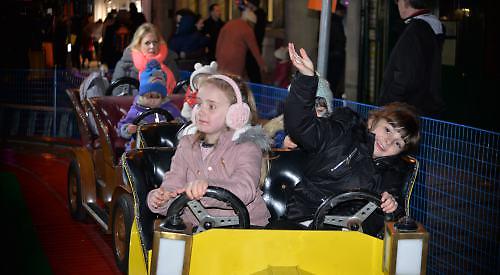 HENLEY’S Christmas Festival has been cancelled because of the coronavirus pandemic.

The town council took the decision due to the Government rules limiting numbers at events and the risk of spreading covid-19.

Instead, it plans to market the town as a festive shopping destination and has adopted the slogan “Support Henley”.

The council says it wants to support the town’s traders by extending the run-up to Christmas. This should help to avoid too much footfall and queuing.

It is also supporting an “alternative” living advent calendar where different businesses in town will decorate their windows in support of a charity.

There will be a trail map online and pavement stickers with advent numbers on them and arrows pointing in the direction of the next window.

Councillor Sarah Miller, chairwoman of the council’s events sub-committee, said: “In the past we have had one night where the shops stayed open and we attracted thousands of people into the town. Obviously, because of covid, we can’t do that this year so we’re looking at ways we can still make the town really Christmassy and still have a lot of things happening but not attract a crowd in one hit.”

A report to a meeting of the sub-committee on Friday said the key to success would be to have small activities that “improved the shopper experience and general ambiance”.

It continued: “We need to extend the festive period while also ensuring a manageable number of people come to town to support the town’s businesses.” The council says its plan should be flexible in case the coronavirus guidelines change.

It will use “town ranger” Trish Rae to help with queues and organisation and may also have pop-up sanitisation units manned by its staff or councillors.

Late night shopping will be held every Thursday from November 19 to December 17, each time finishing at 7.30pm. The first night will have a slot for key workers to do their shopping. Window stickers will be produced for businesses taking part.

The town’s Christmas lights will be switched on on Thursday, November 26 with a small ceremony at 5pm. There will be music every Saturday, Sunday and Thursday evening from November 26.

Markets throughout December will be festive and the council wants to have a chestnut stall.

Other ideas include pre-recorded bedtime stories for children using famous faces from Henley, including Mary Berry and Ben Fogle.

Philippa Ratcliffe, who founded the Eat! Food Festival in Henley, put forward the idea for the alternative advent calendar.

She told the meeting that most shops and businesses decorated their front windows anyway so it would be beneficial to put this to use. Town and community manager Helen Barnett said there needed to be some benefit for retailers.

“We have got some ideas of potentially how we could do that with offers,” she said.

“We have a number of people willing to do it but a number I’ve spoken to don’t want to do it because it’s the busiest time of year.”

Councillor Miller added: “We’re certainly going to give this a go and hopefully we can get as many of the retailers on board as possible because, at the end of the day, it’s about making Henley sparkly and Christmassy and lovely.”

Bea Pearson, who runs home decor shop Wild & Rust in Duke Street, said she would be running wreath-making workshops and that she could run some for children.

The 30th annual Christmas festival was due to be held in the town centre on the evening of Friday, November 27.

Traditionally, it features the switching on of the town’s Christmas tree lights and there are also fairground rides, food stalls, carol singing and stalls run by businesses, charities and community groups.

The Henley Living Advent Calendar, which would have run from December 1 to 24, has also been cancelled due to covid-19.