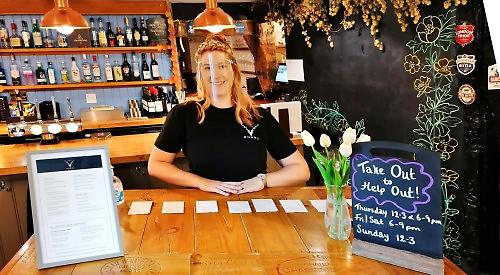 PUBS and restaurants across South Oxfordshire have reverted to offering takeaways to boost takings during the second national lockdown.

The pre-Christmas period is normally a crucial time of year for the hospitality sector but all non-essential businesses have been ordered to close until at least December 2.

Some pubs and restaurants already had successful models to return to from earlier in the year, while others are trying their hand at takeaways for the first time.

The Greyhound pub in Peppard is serving takeaway food seven days a week from the forecourt of a new shepherd’s hut.

Celebrity chef Antony Worrall Thompson, who has run the business since 2009, said: “We were predicting that this second lockdown would happen and we ordered the hut from a company in Bristol called Tudor Catering.

“I could see with the figures that we were heading for a second spike. None of us wanted another lockdown and we thought we might avoid it in the South but because of this we are ready.”

The Greyhound only offered takeaways briefly during the first lockdown.

“This time we are doing it for seven days a week and there are a lot of family favourites,” said Mr Worrall Thompson.

“The hut is full of state-of-the-art equipment and we will carry on using it after lockdown, so it is here for good.”

All orders for the Greyhound2Go service must be made by phone. The hut is open from 5pm to 9pm and customers have to collect their orders in 10-minute intervals in order to maintain social distancing.

Mr Worrall Thompson said: “I hope the lockdown will only be for a month but I’ve got a feeling it’s going to be longer. We will keep our fingers crossed.

“I imagine it would be political suicide not to let people out for Christmas.

“I think we’ve had good support from the Government so far — we could have done with a slightly bigger grant, but the furlough scheme is very good.”

Jayne Worrall, landlady of the Bull pub in Wargrave, did not offer takeaways during the first lockdown but is doing so this time.

The service runs on Fridays and Saturdays from 6pm to 8.30pm and on Sundays from noon to 4pm for lunch orders.

Mrs Worrall said: “Hopefully it will only be for a month this time. This is new territory for me and I’ve got no idea how it will go.

“It’s nice to do something for the village. I’ve had a tremendous reaction and people seem delighted that I have decided to do it. It’s just me and my chef doing everything.”

She said the pub had been trading well since re-opening following the first lockdown despite a slow start. Mrs Worrall said: “This year won’t be a write-off but it has been hard. We had three months of no trading and now another month so we’ve lost a third of the year.

“You spend so much time playing catch-up that you only feel like you’ve got half a year to make good.

“It takes a lot of time to get going and build up the momentum again, which is why it is hard to have to close again. It is a big blow.”

The Bull, a Brakspear pub, had continued to offer its own version of August’s Eat Out to Help Out Scheme, which ensured a steady flow of customers.

Mrs Worrall said: “I had planned to do it in November as well. A lot of new people were coming every week and I really felt like I had got the pub back up to 70 per cent.

“It is hard because now the mat has been pulled out from under our feet again.”

Tenant Joe Miller has invested in a new pizza oven and has 12 different toppings to choose from, including vegetarian options. There are also pub favourites, which rotate on a weekly basis.

Takeaways are available from 6pm to 8pm, from Monday to Saturday. The Brakspear pub also offers traditional Sunday roasts.

Mr Miller said: “We only did the Sunday roasts during the first lockdown but we’ve decided to step it up this time.

“I invested in the pizza oven because I could see that we were going to have another lockdown and people are going more down the takeaway route.

“I need the takeaway idea to work well because I’ve still got bills to pay. Brakspear have lowered the rent but there are still costs that have to be met.”

He has furloughed six staff and is doing his own cooking, with a volunteer helping to do deliveries when necessary.

Mr Miller said: “Everybody is in the same boat. We were trading extremely well until the Government announced the 10pm curfew and that scared a few people. Luckily, my cellar was running right down anyway.”

He said it was “a massive disappointment” to have to close the pub but added: “I can’t see what else the Government could do and nobody would want to be in that position.”

Owen Hardy and his fiancée Jade Jeffries, who took over the Horns pub in Crazies Hill in September, are offering a takeaway service on Thursdays (noon to 3pm and 6pm to 9pm), Fridays and Saturdays (6pm to 9pm) and Sundays (noon to 3pm).

Customers can call or order through the pub’s website and have 10-minute slots in which to collect their food.

Miss Jeffries said: “We were gutted to have to close. We had our busiest weekend a couple of weeks ago and things had been going very well, so it is a shame.

“We are hoping the takeaways will keep the momentum going and then, come December, everybody will be raring to get back out again.

“It is a worry for everyone and we want to be back celebrating, particularly with the way this year has gone.

“From a business sense, December is one of the busiest months of the year and it makes up for January and February when it is more quiet. We hope the lockdown will just be a month and we are trying to stay positive.”

The Cherry Tree Inn in Stoke Row is offering a Thai takeaway service from Wednesday to Sunday, from 4pm to 9pm.

There was a “Thai takeover” on the menu before the first lockdown, which proved to be popular and ran for two weeks.

Dan Redfern, who runs the pub, is also offering free two-course meals to families in need. Every day, there is a main course, including a vegetarian option, and a pudding.

Mr Redfern said: “They may be people who know of others who are vulnerable or elderly and they can come and collect it for them.

“There is also the option to donate towards the scheme if you want to and it will be totally paid for by myself and one of my regulars.

“I think it is a really nice thing for us to do. Even though we live in a fairly affluent area, I feel there are still a lot of people that still need support.

“My whole chef team are furloughed but each day a different person will come in and do the dish and because it is non-profit-making, you can do that and still be furloughed as a form of charity work.”