Charity cyclist dumps Scrap the Mask slogan due to covid 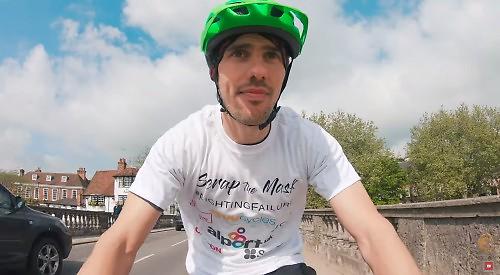 A FILM-MAKER who chronicled his charity bicycle ride across Europe has had to rename his campaign because of the coronavirus pandemic.

Sam Clarke, who has a degenerative kidney disease, planned to publish weekly highlights from his travels under the slogan Scrap the Mask because he wants viewers to share their own struggles and not hide behind a “mask” of false happiness.

But he has now adopted the moniker Adventure Man Sam following criticism from strangers who wrongly assumed that he opposed the use of face coverings to control the covid-19 outbreak.

Over the past year, false claims have circulated online that masks don’t prevent the spread of covid-19, which has prompted social media platforms to crack down on users who spread misinformation.

Sam, a freelance video producer, who used to work at The Creative in Henley, said: “Adventure Man Sam was the name I planned to use when I launched my blog in 2013 but I’ve had to rebrand because most people will always associate ‘scrap the mask’ with covid.

“There was no harm in it then and it was a completely apolitical metaphor but in the current climate it has become very political.

“I posted my first episode in a cycling forum under the old name and although some people took the time to read what it was about, there was a lot of judgement coming back at me.

“I realised it had to go because, at first glance, it looks like I’m encouraging people to do the exact opposite of what we’re all supposed to be doing. It’s an unfortunate misunderstanding but I only want to spread positivity and don’t want to have to spend ages explaining myself.

“Unfortunately, I’m still wearing a T-shirt that says ‘Scrap the Mask’ in most of my footage but I can add a note on screen so people know what it’s really about.”

Sam, 33, was diagnosed with Alport syndrome when he was two and will eventually have to undergo dialysis. His uncle Terry Sopp, from Woodcote, also has the genetic condition and Sam wears hearing aids as it also affects his ears.

He set off from Market Place, Henley, in May 2019 and the first episode in his series follows his journey to Dover and across the English Channel on a ferry.

He then spent 10 months cycling more than 3,300 miles through 14 countries as far afield as Croatia, Bosnia and Herzegovina, Montenegro and Albania while completing 25 skydives along the way.

He rode up to 35 miles daily while carrying 40kg of camping gear and supplies in pannier bags and filmed the journey, as well as his interactions with people along the way, using GoPro action cameras fixed on his bike, plus ordinary video cameras and a drone.

He would have continued beyond Albania but came home last spring to avoid being stranded during the first coronavirus lockdown. When restrictions eased in the summer, he spent seven more weeks cycling 1,141 miles from Land’s End to John O’Groats. Sam, whose efforts have raised almost £20,000 for the research charity Alport UK, has produced a total of 72 episodes, each about 15 minutes long. He hopes to raise awareness and encourage further donations.

He said: “It was amazing to rewatch my footage and relive so many incredible moments.

“There was plenty that I’d forgotten but was really glad to have filmed, like getting directions from locals when neither of us spoke each other’s language. It was a reminder that people are generally decent wherever you go.

“I did my best to keep my ego out of things and not exclude a shot because I didn’t like the way I looked. There were tough moments on the trip and if my hair looked messy or I looked like I’d just been crying, it was an honest reflection of that moment and people needed to see it.

“The first episode has been well received and I hope people will continue to enjoy it.”

To watch the series or donate, visit
fightingfailurechallenge.com