I was shocked by river rubbish 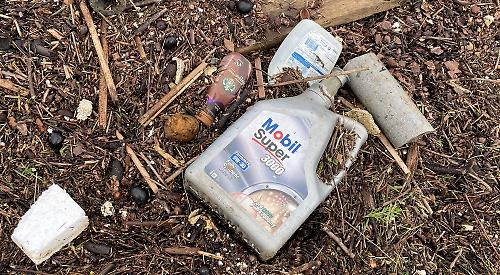 AN environmental campaigner was shocked by the amount of rubbish she found in the River Thames in Henley.

Lynne Lambourne decided to investigate the condition of the river following the recent floods.

She had been due to join a scientific sailing trip in the Caribbean next month but this was cancelled due to the coronavirus pandemic.

Ms Lambourne, 46, from Peppard, is an award-winning interior designer who uses upcycled furniture and salvaged materials.

She also founded Warriors on Waste to help reduce the use of plastic and encourage sustainable living.

She visited Henley with her daughters, Grace, 15, and Kate, 12, and spent two hours on the river bank from the Angel on the Bridge pub to Hobbs of Henley.

Much of it was in the water but they collected rubbish that had been washed up and put in a rubbish bag.

Ms Lambourne said: “Because I can’t do the scientific research on the ship, I decided to do it on the river in Henley. It showed me that our section of the river isn’t as clean as people might think.

“We’ve got a massive litter problem and most of it was debris from boat maintenance, so it is clearly the people who say they love the river so much and have boats who are polluting. It was quite shocking actually.

“The flooding had brought a lot of waste to the surface, so it made it much easier to see and there was a huge amount.”

She believes attitudes towards littering and the environment in the UK were improving until last year, when the pandemic shifted attention away from the subject.

“We really need to focus on it again because covid has only heightened the problem and the planet isn’t getting any better.”

When then restrictions are eased, she intends to hold regular litter-picks along the river and teach more people about following a sustainable lifestyle. “I’ve made it a bit of a personal mission to go out there and educate people,” said Ms Lambourne.

“I think so many people view it as being the Government’s problem, or a problem that someone else needs to solve, but actually it’s the other way around — it needs to start with us as we can all make those changes.”

Next month was supposed to be taking part in the sailing mission with Exxpedition, a community interest company which organises all-female voyages exploring the impact of solution to plastic and toxic pollution in the sea.

She applied to be part of the crew last year and was accepted after a long interview process.

She had to demonstrate that she was already involved in helping the environment in her community.

Ms Lambourne said: “I’ve always loved the ocean but a few years ago I realised that it wasn’t as it used to be.

“I just thought something had to be done and the more research I did the more terrified I became.”

The 15-day trip would have involved carrying out studies in St Lucia and supporting local communities before sailing 700 nautical miles to Bermuda, studying en route.

“It was not going to be a holiday by any means and I’ve never sailed before. We would have four crew members who were experienced and the rest of us would learn on the way.

“It would have been an amazing experience.

“We would take samples from the sea and air to look at the pollution. A lot of the crew are scientists and environmentalists and the idea is that the crew all start working together and develop a superpower each.

“Then we go back into our communities and spread the word and continue the research.” To compensate for the voyage being cancelled, crew members have taken part in a series of online events.

They held virtual meetings with representatives from Fiji to learn more about issues affecting the nation of 300 islands.

Fiji uses between 50 and 60 million plastic bags per year and in many areas typhoons have resulted in large amounts of plastic being deposited into the water.

Ms Lambourne has been involved in Zoom sessions with representatives from the Fijian government, discussing possible solutions using data provided by locals.

Exxpedition was founded in 2014 by ocean advocate and skipper Emily Penn. The mission is to change the way people feel by building a global network of women from different backgrounds to carry out research and explore potential solutions.

• In 2017, Ms Lambourne received the interior designer of the year award for room sets at Grand Designs Live. Her living room design was based on upcycled furnitute. In 2019 she won a Sue Ryder Women of Achievement Award in the innovation category.