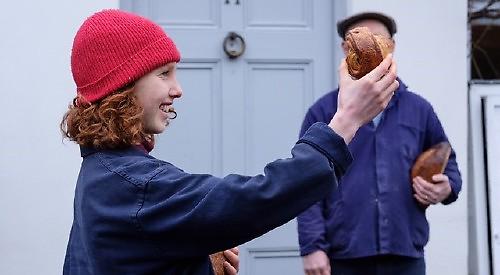 A MAN and his teenage daughter who run a bakery in Watlington have been shortlisted for a book award, writes Anna Colivicchi.

Alex and Kitty Tait wrote Breadsong: How Bread Changed Our Lives about the story behind the Orange Bakery in High Street.

The book, which will be published in May next year, is one of three finalists for this year’s Jane Grigson Trust Award, which is made to a first-time writer of a book about food or drink which has been commissioned but not yet published.

Mr Tait said: “We are thrilled. I remember reading Jane Grigson’s food columns in the Observer when I was growing up, so being nominated for a prize in her name is very exciting.”

The book tells of the pair’s journey from when Kitty started the business in her parents’ kitchen at their home in Gorwell to opening the shop in May 2019.

She used to attend Icknield Community College in Watlington but left to be home-schooled.

Mr Tait, a teacher, said: “Half of the book is the story of how we got to this point, talking about the difficult times that Kitty had as well as the really positive times, and the second part is all about recipes.

“Kitty was ill and she couldn’t go to school, so we tried to find things that could occupy her and make her happy, that would give her a sense of focus.

“We tried everything, from gardening and painting to sewing, but nothing really worked.

“Baking was the first thing that made Kitty step out of herself and gave her a sense of satisfaction.”

They quickly realised they couldn’t eat all the bread they were making, so they started to give it away to friends and neighbours, who loved it and kept coming back for more. They later began a subscription service and finally opened the shop.

“The idea of a shop might have been something I would have had after five years but Kitty said, straight away, ‘We can do this’.”

The book is illustrated with Mr Tait’s drawings and Kitty’s photographs.

Kitty said: “I had my Instagram account to look at and it was really lovely to be able to scroll through and remember where we were a year ago, remembering our whole story and all the people who helped us along the way.

“We loved writing the book — it has been lovely to remember and reflect.”

Mr Tait hopes the book will inspire readers to experiment with their baking.

He said: “We have endless bookshelves at home and there’s something very special about cookbooks because they are used much more than any other kind of book. They may be covered in food stains but you become very fond of them.

“The idea that we might have a book that people keep going back to is very special.”

The winning book will be announced at the end of this month.

Geraldene Holt, a food writer who chairs the panel of judges, said: “The three shortlisted books all contain wonderful recipes but they are also memoirs in which the authors explore their identities and place in the world through food. Deciding the winner will be a fascinating though difficult task.”

Breadsong will be published by Bloomsbury Cooks.